Series Review: For Me trilogy 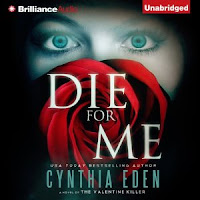 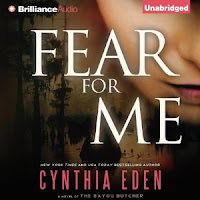 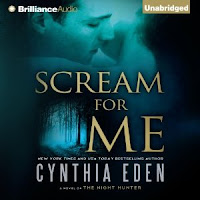 I first discovered Cynthia Eden by reading her Deadly series (Deadly Fear, Deadly Heat, Deadly Sins--click titles to see my short reviews), and loved them.  So I went on to pick up more books by Cynthia Eden, specifically the For Me trilogy, since they also encompassed that same, dark and gritty, creepy serial killer type of story.

But when I had read Die for Me, it was actually kind of... flat.  It didn't give me that same excited thrill that the Deadly series had given me.  And I found the main female character, Catherine Cole, kind of over-dramatic and whiny, even though I knew she had a reason to be frantic and super-distressed.  To be fair, I had half-listened to the audio book and half-read the Kindle e-book--it's entirely possible that the narrator made the heroine sound too much like a sobbing, distraught mess for 90% of the book.  Again, I understand that the heroine had every right to be a sobbing, distraught mess based on the things that have happened to her, and continue to happen to her... but it doesn't mean I have to like it.

In the end, the book was still enjoyable, so I didn't feel like making a fuss.  I gave it a 3-Star rating and moved on without any words.

My re-read of Die for Me didn't turn out any different.

As for the other two novels... truth be told, Fear for Me was actually quite exciting, and I had a soft spot for the main heroine, Lauren Chandler.  She's strong, independent, and authoritative, and I liked her.

The book itself was spine-tingling and actually quite attention-stealing; although I did have a hard time getting into it at the beginning.  The main hero, Anthony Ross, kind of bugged me and came off as way too intense; I sometimes felt like he maybe needed a "Chill the Fuck Out" pill or something.  But, again, Lauren was a pretty cool gal, and being the District Attorney just made her oh, so much cooler.  It also helps that she DOES try to find a balance between doing her job as District Attorney, and not being TSTL by painting a target on her back.

I mean, she's the D.A., for crying out loud.  Just the job alone paints a target on her back, so it's not like she could hide under a rock for the rest of her life.

Finally, Scream for Me... was just not memorable.  Again, our main hero is way too intense in his obsessive behavior... pretty much when it comes to anything.  Again, we have a heroine with a tragic past that she keeps secret until the main hero forces it out of her.  Kyle McKenzie and Cadence Hollow were just NOT interesting people, and instead felt like a repeat of every other tragic heroine and broody alpha out there; which is kind of a disappointment, because I like reading Rom-Suspense where the couple is an investigating team of sorts, both in law enforcement.

But, maybe it was just my real life situational mood low, or something... but I couldn't really get into this book, and even though the serial abductions and killings could have been intriguing, I just found the entire story too much of a regurgitation of the previous two stories--or even of any other serial killer story--to really care.  And, again, it could have just been attributed to the fact that Kyle and Cadence were not interesting people to follow, which makes me feel like I've read this story somewhere before.

I decided to insert the first two books into Romance Bingo 2017:

I couldn't justify using Scream for Me for any of the squares, so I chose not to... the only other squares possible have already been taken.