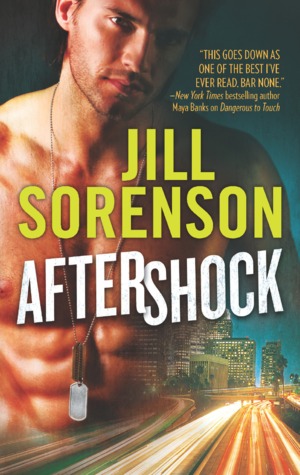 by Jill Sorenson
Book 1 of Aftershock

As a Side Note on 3/26/2017:
I reread this book as an audio listen, narrated by Piper Goodeve--a way to refresh my memory about this world so that I can dive into the rest of the series, hopefully to finish it within the year.

For some reason, the second go around reading this book wasn't as exciting as the first time.  Maybe because I already knew what was going on?  Or maybe because some of the characters seem a bit more... frustrating than I remember?

Or maybe I remembered my experience a bit differently as time passed.  After all, I had read this book the first time about three years prior in 2014.  I have slept since then, and have also read 300+ books since.

Anyway, the narrator, Piper Goodeve, for this audio book was also a bit disappointing.  The distinctions between characters weren't done very well, and the inflections of her voice don't seem to depict character dialogues properly--excitement doesn't sound exciting, happy voices seem flat, and sad voices... well, they also seem flat.  I'm going to listen to the next book anyway, if only to see if she improves.

Meanwhile, enjoy the slightly edited review below that I wrote for this book back in 2014.  My feelings and thoughts haven't changed much.


I've always enjoyed a good disaster movie, so the idea of a Romantic Suspense combined with the disaster element was an interesting one I was willing to take up.  Of course, the only difference is that the element of a "villain" had to be included into this book as well, whereas most disaster movies involve enough tragedy with the whole "Humans versus Nature" thing to deliver enough suspense.  Mother Nature is a force enough to be reckoned with on her own, so you typically don't really need humans to cause more trouble.

Fortunately, the way that the book presents human bad guys as part of the repercussions of a disaster works out pretty well.

Chapter One of the book immediately dives into the disaster as an 8.5 earthquake devastates San Diego.  And then, everything sort of just spirals out of control from there--in a good way.


The Story:
Paramedic Lauren Boyer and her partner are on their way to an emergency call when the earthquake hits.  Within seconds, their vehicle has plunged under the depths of a collapsed freeway, and without warning Lauren's partner is killed with an instant impact from a falling SUV.  Fortune on her side so far, Lauren scrambles out of the ambulance alive, meeting up with Garret Wright, a mysterious man, dangerous looking, and ex-military, who is on a self-imposed mission to help save as many people as he can.

The two of them manage to find an RV, unscathed where an elderly man and his granddaughter are staying put.  Along the way, they save a young pregnant teenager who's vehicle explodes with her aunt still trapped inside.

Together, this small group of survivors work together to try and find a way to escape the now cavernous underpass while remaining alive.  Other survivors are found, but not long afterwards, the unconscious Sam Rutherford is the only one remaining in Lauren's makeshift triage tent of wounded.

Also impeding their potential for survival is a group of convicts who managed to get free when their prison transport van crashes during the earthquake.   And it seems that they're out to cause trouble for our survivor group, not caring whether anyone else lives, and not too concerned with helping anyone else survive.


My Thoughts:
This book was exciting to me because it's a different type of Romantic Suspense than the typical crime thriller, or military romances I typically end up reading.  As I said, I enjoy a good disaster movie any day and this was attractive to me.  Unfortunately, despite all the activity and action in the first few chapters of the situation set-up, the book felt slow-going.  The narration was detached and disjointed at lots of moments until the story itself began to make more progress.  When our survivors are finally situated, the narration seems to smooth out enough (or the story picks up enough excitement), that I just kept reading without too many quibbles.

There is no holding back on the gore or the details; the imagery is quite vivid and gross at times with blood, as well as the descriptions of dead, decomposing bodies, and even maggots.  I shuddered at the thought of all the descriptions of the corpses and the stench and whatnot.  But the action is told in a gritty, gripping way that keeps you hooked with interest for the conclusion.

Characters were great, though a lot of the secret reveals seemed irrelevant in the face of survival needs and disaster repercussions.  The angst created by Garrett's big secret about who he is seemed insignificant, almost unnecessary.  And Penny's own secret about her identity was frustrating considering there were more important things to worry about.  Then there was Owen and why he wouldn't just fess up about why he had racial tattoos all over his body--I think he created a lot of his own misunderstandings by remaining silent, though in the long run it didn't seem to matter anyway.

The romance was unbelievable and a bit lukewarm.  I'm inclined to believe that our main couple could become friends and lovers in the face of danger, but I'm not sure that this is a good way to base a future relationship on.  It's conflicting since you could feel the chemistry they shared based on sexual tension, lust, and when they finally slept with each other.  But I couldn't quite grasp the chemistry between them that created a "falling in love" situation.

Nonetheless, this was an enjoyable first book to a series, and the appeal of the next book involving Sam Rutherford, who remained in a coma throughout most of this first book, is very present.


This review was originally posted at Ani's Book Abyss / BookLikes in November 2014.