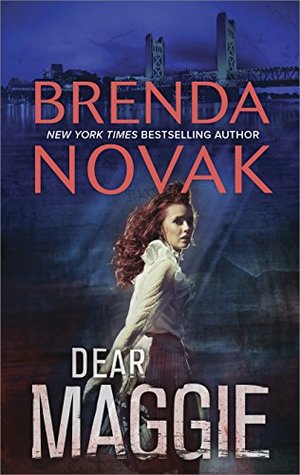 
Maggie Russell, a police reporter in Sacramento, works the night shift, and she's finally stumbled on the big crime story that will truly establish her career—if it doesn't end her life.  A serial killer who moves from one city to the next.

As if things aren't complicated enough, Nick Sorenson, the paper's new photographer, seems to be taking an unusual interest in this case.  And in her.  Maggie doesn't realize that she's falling in love with a man who's not what he seems to be.  A man whose deceptions may save her life.


I feel like our MC, Maggie, should just take out an advertisement and broadcast everything about her life into public: where she lives, where she works, all of her trade secrets, what she and her son look like, and how best to infiltrate her home--a home she doesn't even bother taking precautions to secure or guard while there's a serial killer running around killing women.

Of course, since she gives no reason as to why she's also being so open about her entire life with "John," her new online potential boyfriend, I suppose her behavior is par for TSTL anyway.  They'd only met all of twice, maybe; he takes her on a cyber date, refuses to send her a picture of himself... so SHE sends him a picture of herself with her son... y'know, just to hint that she'd like to see a picture of him.  She spends a lot of time telling him anything and everything about herself, even some of the confidential stuff she works with as a reporter.

And at that point, she STILL has no idea who this guy really is.

Honestly, if "John" weren't our male MC, playing undercover to try to "get to know" Maggie, and get friendly with her to make it easier to protect her, I foresee Maggie stumbling into some psychotic serial murderer who probably uses the internet to lure unsuspecting lamb to be chopped.  For a single mother who's apparently heard and seen a lot of stuff in her job as a crime reporter, she really doesn't seem to have a grasp about how dangerous strangers can be.

I'm not sure why she figured that she knew and understood "John" so well.  I'm not even sure why she was so quick to trust him.  I suspect this was just part of the plot device to get our hero and heroine into a situation where there would end up being super-angst by the end of the book, because lies and deceit are being tossed around.  I also figure that we might be playing into a bit of the "You've Got Mail" thing (a movie of which I loved, BTW, when it first came out in 1998).

Keeping in mind that this book was written in 2001, when internet was still kind of a newly developing commodity, I suppose I shouldn't give her so much crap about not realizing the dangers of cyber scams and cyber predators.  Maybe.  In present day, people still fall for these things, no matter how many warnings are put out there.  But she is a crime reporter--I figured that, having seen and heard so much about the dangers of the world, she'd have more of a sense of basic security than to trust a strange man she'd never met online before so readily.

Even before the age of computers, you wouldn't just trust a random stranger enough to tell him your whole life's story after just one conversation... right?

Back to the book itself...

I had considered pulling my DNF trigger as each chapter progressed.  Maggie didn't get any less frustrating, and Nick is kind of boring anyway.  There are literally no other characters of any significance in this book.  Maybe Rambo--but he's a dog, and most of the time, animal companions tend to make a difference--except that he wasn't all that present in the book.

But, as it turns out, I was curious enough about the identity of the serial killer than I would have liked.  And also, I don't think I've ever DNF'd a crap book written by Brenda Novak--and there have been some pretty bad ones--if only because there's a certain, attention-grabbing train-wreck quality to her story progressions.  The action keeps moving forward, and you can't seem to find a stopping point because the action keeps moving forward, and the next thing you know, you've read half the book and then some... so you may as well finish the rest of it.  It's only another hundred and fifty pages after all--how long could that take?

Also, at some point in the book, Maggie starts gaining some sense; I think this was after the serial killer starts contacting her by leaving her voice mail messages on her work phone, and implying that he knows what she went shopping for one night, as well as what color panties she owns.  Then she freaks out and starts thinking about the safety of her son, her friends, and herself.  Then she starts locking her doors and windows, agrees to have a police team stationed outside her home to keep her safe, agrees to leave her son at a safer location most of the day while she's at work, agrees to let our main hero move in with her for the sake of not being alone.

It doesn't matter that she barely knows said main hero; she knows only that he's in town for a short while, he's a new photojournalist who is working for her newspaper temporarily... he's been hitting on her and watching her at work...

He's really an undercover FBI agent trying to investigate the serial murders while keeping an eye on Maggie since the last victim was also an investigative reporter who'd had contact with the serial killer.

Of course, Maggie doesn't know this.  Because she doesn't know anything about the men she meets in this book before she lets them live in her home, or learn about her entire life's story.

The crime aspect of the book wasn't entirely engaging, truth be told; and the ending chapters were standard "damsel in distress" scenario.  The romance was lukewarm, and a bit off-putting considering how much lying and secrecy went into the entire relationship since the beginning.

Maggie is your standard, innocent and almost virginal heroine, who's only ever had one sexual relationship with an ex-husband, and is super conservative with her own behavior, even though she readily breaks out of her prudishness for the hero.  Obviously she's had sex, since she has a son, but she certainly acts like it's a new thing to her.

Nick is the standard broody alpha with commitment issues... who lusts after the heroine, but finds that he's ready to settle down and get married and be in love for the long haul after he meets said heroine.  Because of that special "I've never felt this way before" factor.

I can't say I'm a hundred percent fond of Brenda Novak books, but for some reason, I end up finishing them easily, and keep coming back for more.  At the very least, they're not entirely terrible, even if this one DID get really frustrating.