Quick Thoughts: Footsteps in the Dark 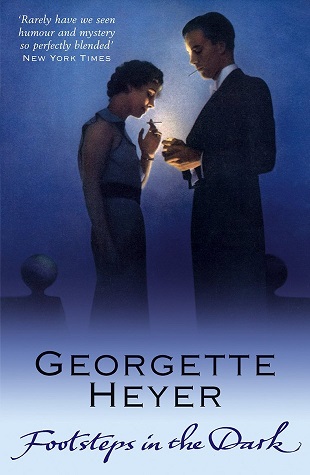 Footsteps in the Dark


Locals claim The Prior is haunted and refuse to put a single toe past the front door.  Left empty for years, and even their deceased uncle chose to live in a different house, far away from this particular property.  But the ramshackle old house, with its rambling charm is the perfect setting for a much-needed holiday for siblings Peter, Celia and Margaret, who have inherited it from their uncle.  It wasn't the lack of modern conveniences that made a summer spent at the ancient priory mansion such an unsettling experience.  It was the supposed ghost... or whatever was groaning in the cellars and roaming the countryside around Framley Village after dark.

But when a murder victim is discovered in the drafty Priory halls, the once unconcerned trio begins to fear that the ghostly rumors are true and they are not alone after all!  But traditionally ghosts don't commit murder.  And in this case, the things which go bump in the night are deadly.  With a killer on the loose, will they find themselves the next victims or will they uncover the true in time?  Does the key to the crime lie in the realm of the supernaturalr?  Or is the explanation much more down to earth with a more corporeal culprit of flesh and blood?


The premise for Footsteps in the Dark was definitely one that I was extremely excited about.  Even though I'm a scaredy cat, and don't really like scary stories, I get really giddy about haunted house stories, and a double whammy would be a haunted country house setting.

This is my second Georgette Heyer book, and while I didn't care for the first one I read of hers, Death in the Stocks, this book definitely made up for it.  By rights, it's not the best book in the world, and the investigative process was probably a bit questionable, but the characters were fun, even if the humor slipped into "tackily overdone" territory a few times.

And yet, I still found the bit of comical interactions rather appealing.  I DO wish that the women had more of a role in the investigation... and well, more of a role at all in the book--they seemed like background scenery, to be totally honest.

The romance was most definitely insta, which made it a little hard to take it seriously, especially since Margaret's love interest was more or less a creepy unknown who kept secrets when they first met.  I'd have been happier if their courtship didn't only consist of one walk together and a cryptic conversation in which Margaret is still unsure whether or not Michael Strange was a killer.

Nonetheless, the rest of the book was very enjoyable.  The few moments involving the Monk got appropriately creepy enough to maintain the haunted house atmosphere.  The side characters were also appropriately delightful as comic relief.

And so I'd definitely give Ms. Heyer my continued interest in her work.