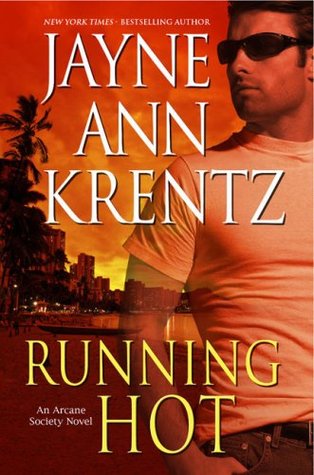 
Ex-cop Luther Malone, lifelong member of the secretive paranormal organization known as the Arcane Society, is waiting to meet Grace Renquist.  Hired as an aura-reading consultant in the quest for a murder suspect, she’s got zero field experience.  She’s from tiny Eclipse Bay, Oregon.  She’s a librarian, for heaven’s sake.

As for Grace, she’s not expecting much either from Malone, who walks with a cane and isn’t so good with a gun.  Nice résumé for a bodyguard...

But even before they reach their hotel in Maui—where they’ll be posing as honeymooners—Grace and Luther feel the electric charge between them.  Problem is, they need to remain vigilant day and night, because it soon becomes clear there’s more going on here.  Rogue sensitives—operatives for the underground group Nightshade—are pouring into the luxury resort like there’s a convention.  Grace recognizes those dark spikes in their auras.  She saw the same pattern in someone else in another life—a life she hasn’t revealed to Luther or anyone else.  And she understands how dangerous these people can be . . . especially with those para-hunters at their sides.

While the pair’s employers at Jones & Jones scramble to get them backup, Luther and Grace have to think on their feet.  The criminals in their midst aren’t just high-level sensitives: They’ve enhanced their talents with a potent—and unpredictable—drug.  And as Grace knows all too well, if you don’t control your powers, your powers will control you...


I always find it extremely hard not to enjoy a book written by Jayne Ann Krentz, and while I've read more books written in her other persona, Amanda Quick, I've found that her contemporary Rom-Suspense novels are so much more enjoyable.  Probably because, even while the formulas for the romances in her historical fiction are always the same, the ones in her contemporary settings do not seem that way--or I just don't notice if they ARE the same formula.

Either way, I immensely enjoyed Running Hot and absolutely adored our main couple and their developing romance.

Of course, that doesn't mean that there aren't flaws in this book, starting with the insta-lust and how quickly our main couple end up having steamy sex, and onward to the slightly confusing set-up of their respective psychic aura talents and how those talents are used.  Then there was also that little snag of how the book felt like two stories mashed into one, starting with an undercover operation, and then moving into a "Don't let the crazy psychic Siren murder you" side tangent.

I like undercover operations as a base board for jumping into a romance--here there be loads of potential for sexual tension and the like.  But unfortunately, there was sexual tension brought upon from the "lust at first sight" rather than being situational...  A little disappointing, but I'll swing with it.

Meanwhile, we've still got that ongoing conflict in the background involving the rogue psychic organization called Nightshade and their obsession with the founder's formula.

If you didn't understand any of the stuff I've just thrown out there, it's probably for the best, and you probably should rewind and start reading the series from the first book.

Anyway...  There's not much else I can come up with to say about this book.  It's extremely enjoyable for the moment, and I love learning more about the Arcane Society and the world it encompasses as each book goes by; I love reading about all the psychic talents we've yet to touch upon.

And even though the main, background conflict of the overall series doesn't seem all that interesting to me, it DOES have its uses as the connecting factor from one book to another, bringing our characters together, and referencing previous books and characters.