Quick Thoughts: The Trouble with Mistletoe 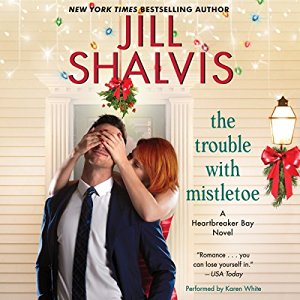 The Trouble with Mistletoe

Willa Davis is wrangling puppies when Keane Winters stalks into her pet shop with frustration in his chocolate-brown eyes and a pink bedazzled cat carrier in his hand.  He needs a kitty sitter, stat.  But the last thing Willa needs is to rescue a guy who doesn’t even remember her . . .

He’ll get nothing but coal in his stocking.

Saddled with his great-aunt’s Feline from Hell, Keane is desperate to leave her in someone else’s capable hands.  But in spite of the fact that he’s sure he’s never seen the drop-dead-gorgeous pet shop owner before, she seems to be mad at him . . .

Unless he tempers “naughty” with a special kind of nice . . .

Willa can’t deny that Keane’s changed since high school: he’s less arrogant, for one thing—but can she trust him not to break her heart again?  It’s time to throw a coin in the fountain, make a Christmas wish—and let the mistletoe do its work . . .


If it's one thing I've come to understand, it's that Jill Shalvis books are charming even when you find them frustrating.

The Trouble with Mistletoe had an interesting premise to work from, however, you could readily tell that it wasn't something meant to be drawn out.  Keeping Keane in the dark about why Willa was always angry at him could have gotten out of hand, or it could have been an interesting twist; except that particular conflict was resolved quite early in the book that made me rather glad.  I figured it was kind of nice that Willa and Keane managed to take the adult way out and let the past go--after all, when you're young, you do stupid things that you might regret in the future.  And at least Keane was a good enough person to feel chagrined about being a jerk when he was a teenager.  And Willa was gracious enough to forgive and move on.

But then we come to a sort of "second half" of the contemporary romance... and things start getting frustrating.

To be honest, what I'd worried about for the first half, actually ended up happening in the second half of this romance.

Basically, there was a lot of wishy-washy, back-and-forth with these two, and it got to a point where I don't even know what either Keane or Willa wanted from each other.  I'm not even sure they knew what they wanted with each other, or themselves, or their own lives in general.  The same conflict kept getting dredged up in monologue about each other's inability to commit... or no, this is about the other person's inability to commit... but wait, it's about his/her own concerns about committing...

After the third time, it got old.

Meanwhile, I found myself also a bit frustrated with the side characters as well.  The last thing you ever want when you're going through a conflicting romance is for friends to be nosy, especially if they're also going to be nosy, interfering, disruptive, and unhelpful.  And while it might have seemed like a comedic insert for Willa's girl friends to be the nosy, interfering, disruptive, and unhelpful lot... it actually kind of got annoying.

Except for Rory.  I liked Rory--she was nosy, but she was also really sincere.  And Archer was pretty cool, too--he wasn't nosy, he wasn't interfering, and he wasn't disruptive; he wasn't really helpful either, but at least he offered to beat Keane up if Willa needed him to, no questions asked.  The rest of Willa's friends felt like they were there just for sheer entertainment.

Keane's staff was also a bit annoying as well.

And then, true to Jill Shalvis form, some tangential conflicts are introduced that are never properly resolved, such as Keane's relationship with his parents--you get a back story, you get frustration from him, you get a teaser... and that's it.

But as I'd stated before, as frustrating as this book got, it still managed to be charming somehow.  Keane's kitty-sitting adventure was certainly sweet and fun; Petunia was a typical Queen Cat, and totally makes you smile.  There's even a brief appearance of a small puppy with paws larger than his own head, and the scenes were super adorable.

This was a mediocre Jill Shalvis work, at best.  Still charming, but I can see where people may not enjoy it.