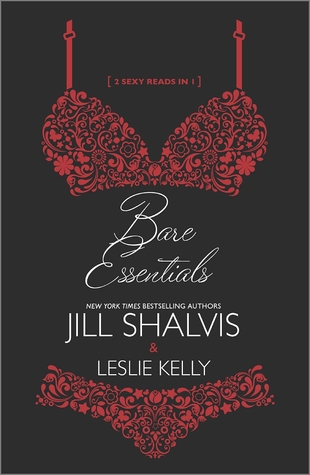 Lingerie model Cassie Tremaine Montgomery intends to have her revenge on the citizens of her hometown—starting with seducing the sheriff, Sean "Tag" Taggart. Tag, however, isn't cooperating.  He's more than willing to set the sheets on fire with her, but he's asking for more than just sizzling sex….  He knows Cassie's not as tough as she pretends.  And he knows she cares about him—even if she won't admit it.  So he'll just turn up the heat until she concedes there's more between them than this red-hot passion.

Kate Jones, the girl from the wrong side of the tracks, is home.  And she's got an agenda.  To get revenge on the man who humiliated her mother, Kate's going to seduce that man's son—the town's golden boy, John Winfield Jr.—and then leave him drooling in a puddle of lust.  However, when she finds herself seduced by a sexy stranger named Jack, little does she guess that the tables have just been turned….


Interesting premise with the adult women's store.  Standard premise of small town girls living a crappy life, wanting to get out and make something of themselves to show their town up.  The revenge story doesn't really build up all that well, and some of the revenge points aren't exactly resolved; however, in it's own way, that kind of creates a different story based on two women's need to take their revenge on a town that always treated them terribly.

Instead, we get a sweet set of stories with a love story and a journey to self-discovery.  Sort of.

Naughty But Nice is a typical Jill Shalvis type story--witty, fun, sexy... with just enough story for it to be enjoyable, and just enough drama for it to be thought-provoking, even while being a bit too angst-ridden for my liking.

And other characters were in line with a typical Jill Shalvis small-town-set, all with their interestingly unique personalities and a potential worth of back story.

The conclusion still seemed open-ended, with the issue between tag and his father quite unresolved.  The issues concerning Cassie's revenge plot kind of loses wind, and it would have been nice to see at least one person from Cassie's past eat their words, or get walloped with some sort of repentance or even get shown up.

But we make this story more about Cassie's own self-revelations, with some life-altering events... and then we move on.  The open ended resolution is probably apt as a way of showing that life just moves on whether or not you get your revenge.  There are always going to be people you treat you fairly, and others who will never see past their pre-judgments.

I'm sure there's a lesson to be learned here; but I'm not entirely sure I can put my finger on what it is.

I found that I liked Naturally Naughty more than Naughty But Nice, if only because the romance felt a bit more down-to-earth.  I mean, sure there's a big "lust and first sight" factor going on here, but it's pretty standard, and not completely unbelievable.  HOWEVER, when we throw in the "meant to be at first sight" deal more towards the end--that whole "I think I've loved you since that first time I saw you" nonsense, I always roll my eyes.  Had that been left out of the story, I might have been more inclined to give it a higher rating.

The revenge story that slowly develops into another self-revelation story feels a bit more realistic in this second Bare Essentials story than the first had been.  Truth, it's not that Naughty But Nice wasn't a believable romance, it just felt too cheesy to be more than a sweet contemporary romance.

On the other hand, Naturally Naughty progresses at a more banal pace, skipping over certain points of the story that had already been told in the previous; but at the same time, it gives more of a feel for Kate's little self-discovery journey as she comes home to Pleasantville and begins to see things in a different light.

Kate and Jack make a great couple, with a nice lusty friendship that slowly builds into more of a loving intimacy as they work around their problems--a semi-feud between each other's family, and a secret hanging over each other's heads.  I find it kind of amusing that both Kate and Jack are holding onto the same secret, unwilling to tell the other for the same reason: they don't want to hurt each other from finding out about a loved one's betrayal.

This story, unlike the first, was more about a self-revelation for both Kate and Jack, and in that sense, I really liked it.  This story is a little bit better resolved, with some old hates and hurts being forgiven and forgotten readily after some reflection by each character.