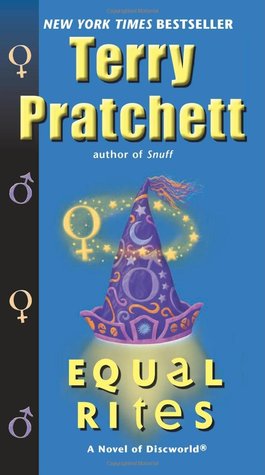 by Terry Pratchett
Book 3 of Discworld | Book 1 of Witches


On Discworld, a dying wizard tries to pass on his powers to an eighth son of an eighth son, who is just at that moment being born.  The fact that the son is actually a daughter is discovered just a little too late.  The town witch insists on turning the baby into a perfectly normal witch, thus mending the magical damage of the wizard's mistake.  But now the young girl will be forced to penetrate the inner sanctum of the Unseen University--and attempt to save the world with one well-placed kick in some enchanted shins!


This is the weirdest book ever, even if not the weirdest book I've ever read (that award goes to Alice in Wonderland).  The book itself took a little time to get into, but the characters start to readily grow on you.  And I've found a nice appreciation for Sir Terry's odd, meandering descriptors for almost everything that is written about.  (I believe I've seen people call them Pratchett-isms?)

Meanwhile, the second half of the book was much more interesting than the first half, even if I still don't have quite the idea what the story was actually about.  There were a lot of clever play on words and some rather thought-provoking instances that probably only really make sense in the context or philosophy of Discworld, though could be applied to the real world if you really think about it.  (More Pratchett-isms?)

Meanwhile, I found Granny Weatherwax rather charming and fun, in spite of her gruff ways.  And the librarian is surprisingly amusing, and now I'm wondering if he gets his own book at any point.  I've grown rather fond of the wizard turned orangutan, who somehow manages to infuse a whole bunch of meaning into a simple, "Ook."