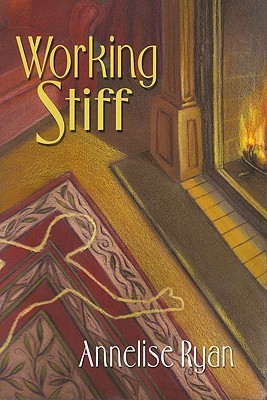 When Mattie Winston catches her husband Dr. David Winston receiving some very special loving care from R.N. Karen Owenby, she quits her job and moves out.  Mattie's best friend Izzy offers her a place to stay and suggests she'd be a natural as deputy coroner.  Now, instead of taking patients' pulses, Mattie's weighing their hearts and livers.

But Mattie's first homicide call turns out to be for none other than Nurse Karen, and even though she saw her ex in a heated argument with the newly deceased the night before, she refuses to believe David could be a killer.  Keeping mum about what she saw, Mattie is also left speechless by the sight of hunky Detective Steve Hurley...

From learning the ropes on her new job to sorting out her feelings about her ex and dealing with her growing attraction to Detective Hurley, Mattie's in deep water and in danger of sinking quickly, especially when she places herself dead center in the path of a desperate yet determined killer.


This is a cute and fun start to a potentially winning cozy mystery series.  There are still some things about the characters and the story that fell short, but all-in-all, I very much enjoyed myself.  In fact, I had my heart set on reading a different book and finishing it before moving onto Working Stiff, but as soon as I started reading this one, I couldn't stop.

Mattie is a funny, readily related to main character with her clumsy foibles and her wild imaginations.  She is very real, very down-to-earth, and absolutely NOT perfect.  She is also quick on her feet and resourceful.  Though if I had to nitpick anything about her, it would be her one-tracked obsession with Detective Steve Hurley.

She has another flaw, which I can totally forgive her for if only because she's new at her job and kind of got hoisted into it by her best friend.  She kind of sucks at the investigating thing, because her tact at questioning people tend toward the "let's just give them the entire story and see what they know."  Which, if you've read enough crime thrillers, law enforcement officers hold back a lot of vital information when they interview people for very significant reasons.  You don't want to give away anything that could potentially screw up an investigation by either tipping off the culprit, or creating a copy cat to muck things up.

But Mattie seems to be find just handing over every bit of information she has to anyone she talks to.  She's going to have to learn discretion, really...

So hopefully, in the next few books to come, Mattie will get more training and pick up a feel for doing her job a bit better.

Except for the fact that she's not a detective and it makes me a bit nervous that she decided to take on investigating this case personally.

Her need to show up Detective Hurley by solving the murder case before he did was a bit childish, because so many things could go wrong.  And seeing as how she's not a trained professional in law enforcement, in real life, this could have opened up a whole can of worms for throwing evidence out of court.  But this ties in with her obsession with Detective Hurley, which was cute at first, but turned into a really badly handled passive-aggressive cat fight between her and any other woman showing the least bit of interest in him.

It makes me cringe a little.  As realistic as the situation is, it bugged me a little bit that she was more concerned about looking good in front of the detective than anything else.  I mean, there's more to life than romance and men, and while I am a devoted romance reader, I tend to get a little irritated when the main character's thoughts keep coming back to her love interest at the most inappropriate moments.

On the other hand, I'm really digging the mentor-apprentice relationship between Mattie and Izzy.  I love all the technical forensic lingo and all the little details that Mattie is learning about as she steps into her new position of deputy coroner.

The few really dark, sad parts of the book near the end is what really made me cement this as a series I will continue to read.  And I'm not saying this because I'm sadistic or anything.  It brings out a different, more serious side of Mattie to balance out that wacky, trouble-making side of her that is probably inserted into the character bio as a point of comedic relief.

Because that particular character trait is just always part of so many main characters in some of the cozies I've read to date, and it really DOES get old.  It's not always cute for your main female character to be klutzy or to generally bumble into things and screw shit up.  Yes.  I DO enjoy the occasional, endearing troublemaker, because goodness knows I don't get along with Mary Sues either.  But to make it a consistent, running gag can really rankle; especially if it's done on purpose just to make the main character seem cute.  Or to make the perfect love interest seem even more perfect.  Or to give said perfect love interest a reason to swoop in and save the day.

But anyway, enough of that...

Working Stiff really is an entertaining and enjoyable first book in this series, and I definitely look forward to reading more, with hopes of seeing some progressive development from Mattie, now that she can start a new chapter in her life.