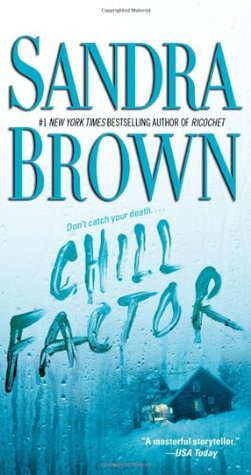 
Five women are missing from the sleepy mountain town of Cleary, North Carolina, and a blue ribbon has been left near where each woman was last seen.  Lilly Martin has returned to Cleary to close the sale of her cabin.  But when her car skids and strikes a stranger, Ben Tierney, as he emerges from the woods, they've no choice but to wait out a brutal blizzard in the cabin.  And as the hours of their confinement mount, Lilly wonders if the greater threat to her safety isn't the storm, but the stranger beside her...


There must be something about these popular, beloved authors that I have bad luck with.  Sandra Brown is touted as one of the genre's "queens", alongside others like Nora Roberts or Linda Howard.  The first book I picked up by Linda Howard had been a flop as well.

Chill Factor wasn't a terrible book or anything; I guess I was just a bit underwhelmed by it.  So in accordance with the GR rating scale, it gets a rating slightly higher than the 2-star "It was okay."  In other words, this was also a 'meh' book--I didn't like it, but I didn't hate it.

My issues?  I had trouble liking any of the characters, and the progression felt dragged out.  The book was written well, and I can kind of see where the secret reveals are supposed to create some kind of "gasp, whoa!" reaction... but I found some of the secret reveals and surprises not quite so incredible.  In fact, the latent patterns of this book's progression pretty much give away the "whodunnit," as well as every other secret reveals there happened to be.

There were too many despicable characters in this book, which kind of turned me off.  And there were some "WTF" moments that made little sense to me.

I'm also a little iffy about the fact that the men in this book are constantly cheating on their wives or treating all the women like crap, but there are no smack downs or standing up to them or the like.  Is this a small town thing?  Or is it a general relationship thing?

In fact, Lilly being the strong, independent woman she is, I would have expected her to have left her ex-husband, Dutch, when she found out he was cheating on her even before they were having marital problems.  Her final reason for filing divorce was definitely a MUST, because WTF!  But it just seemed like a cheating spouse, and a deteriorating relationship wasn't reason enough for her to walk away.  It took something THAT drastic to make her act.

The same with Mrs. Hamer: Her husband being an arrogant prick who talked down to her, treated her terribly, and cheated on her (with teenagers, nonetheless!), and who also didn't seem to really care about how far he was pushing his own son--she didn't even consider a divorce until something terrible and life-altering happens at the end.

Nobody even bothers trying to tell these men to quit being jackasses.

Nonetheless, this book was written well, and it kept my attention.  The main characters, Lilly and Tierney, were hard to like both because their story seemed to drag out longer than necessary, and also because they were just simply not great characters, and their actions were questionable and their logic was fuzzy.  This could have been a great snowbound story, but the execution was less than desirable.

The side characters were kind of interesting, but only slightly more so.  And then there were some tangents that gave me pause, because I couldn't quite determine whether they were supposed to be significant to the main conflict or not.

I will read another Sandra Brown book, if only because I can see why she's such a beloved author, judging by her writing style.  I suppose I just need to pick the right book for that second chance read.