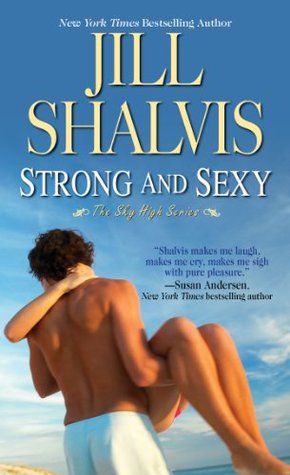 
This second installment to the Sky High Air trilogy is definitely loads more enjoyable than the first.  Jill Shalvis' humor and charm has its chance to shine in a much better fashion with a better set of main characters in Shayne and Dani.

The story's plot itself was a bit flimsy, but I overall enjoyed the character interactions better and liked the heroine more.  It's still not Lucky Harbor caliber, but it'll do.


The Story in Brief:
Between seeing disappearing dead bodies and having an invisible stalker, Dani Peterson's reputation for being crazy is certainly catching up to her.  Fortunately for her, Shayne Mahoney is willing to believe that she is genuinely terrified about something that's happening around her and sticks by her side.

In the meantime, there's sizzling chemistry between them and they can't seem to keep their hands off of each other.


My Thoughts:
So the entirety of this book really centered around whether Dani is really witnessing random acts of crime (a murder in the parking lot, an unwelcome presence in her apartment, a gun planted in her coat, a shooter firing at her at work, another disappearing dead body...), and the Friends-With-Benefits relationship she develops with Shayne.

Every other issue that might have been brought up throughout the course of this book ended up as loose ends in the scheme of a haphazard crime thriller and lots of steamy sex.

So basically, this book really WAS all about the sex.

Of course, the part that kept my attention, really, was the almost non-standard female heroine's penchant for klutziness and her inability to NOT look like a disheveled mess 24/7.  Dani Peterson is the classic clumsy female lead who has trouble setting one foot in front of the other without tripping over herself, who manages to drip ketchup on her blouse all the time, and who inadvertently stabs her lover in the eye whilst trying to caress his face.  She's that heroine we all love to hate because, who's really THAT clumsy and socially awkward?

Except that Dani really isn't that socially awkward and her klutzy personality somehow comes off kind of endearing.  Because Jill Shalvis is a genius and managed to insert all of Dani's disheveled, clumsy moments at all the most likely moments--they aren't randomly forced to insert said disheveled, clumsy personality onto the heroine to deliberately make her seem endearingly klutzy and socially awkward.

In other words, this kind of a heroine may not work for a lot of people.  But the way in which Dani was portrayed kind of works for me.  Top that with the ever-perfect boyfriend and protector Shayne Mahoney who's willing to stick by her side despite his own reserves about whether or not she's really crazy... I kind of found myself loving the antics and bond and steamy chemistry this couple presented.

It's certainly still not the healthiest relationship in the world, but a vast improvement from the previous couple's love story in Smart and Sexy.

It just felt like we were so focused on the somewhat flimsy suspense part of the book and the relationship between Dani and Shayne that we've forgotten that there are other people in this world and other conflicts needing tending to.

Nonetheless, Strong and Sexy was enjoyable enough that I liked it a lot.


This review was originally posted at Ani's Book Abyss / BookLikes in January 2016.