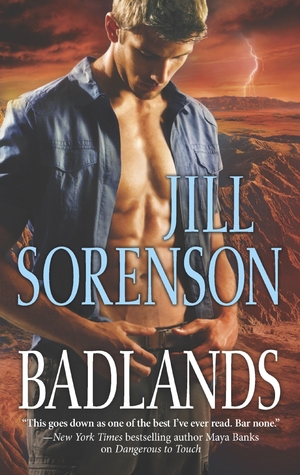 by Jill Sorenson
Book 3 of Aftershock


I think I enjoyed Badlands a lot more than I'd expected to (more on that later).  The entire book is so intense and fast-paced, and it is entirely possible that it is my favorite of the Aftershock books so far... though Freefall was also one I loved, so I really can't decide.

And the characters were so great!  I especially love the fact that we're building onto Owen's character from previous books, as well as the relationship between Penny and Owen from a known history between them.


The Story:
After the events of the San Diego earthquake (Aftershock), Owen Jackson and Penny Sandoval still remain friends, their relationship growing stronger and their feelings deeper as the years go by.  But Owen holds himself back, feeling the differences of their social standings.  In order to get his life moving forward, he agrees to take a position on Jorge Sandoval's personal security team with the condition that he distance himself from Penny.  In return, the politician has offered him a letter of recommendation to help further his career, helping him find a spot with the Los Angeles Fire Department.

But everything changes when Penny is targeted by kidnappers who want to ransom her for money as well as force her father to drop out of the running as a presidential candidate.  In the chaos, however, the kidnappers end up grabbing Penny's young son, Cruz, as well as Owen.  They take the three hostages into the California badlands as part of their ransom plans, but what they hadn't counted on was Penny's escape as well as Owen's determination to keep Penny and Cruz safe.

Whether held captive, or trekking through the unforgiving heat of the desert, Owen vows to guard Penny and her son with his life; even if the person he's fighting against is his own brother.


My Thoughts:
I wasn't sure if I was going to like Badlands since I had a hard time relating to Penny in the first Aftershock book.  She had come off as spoiled, entitled, and prejudiced.  But I suppose that with the San Diego earthquake being years behind us, and Penny being allowed time to grow up, she has come out of the entire ordeal a much more mature person.

Raising a son and gaining acceptance from her super conservative father for getting pregnant out of wedlock has added to Penny's character growth since we last saw her two books prior.  Also, according to the vaguely mentioned timeline, a few years have passed since the San Diego earthquake that brought Penny and Owen into each others' lives.

He's accepted that that has been his life up to that point, and is making steps to turn his life around and make everything work out somehow.  His ambitions are admirable, and his humble personality is kind of sweet as well.

Both characters are great together; both developing as the story progresses into even better people.

Because despite the fact that I love the person Penny is in the beginning of the book, I love that she recognizes and admits how readily she allowed her father to control her life simply because he not only didn't toss her and her son out, but also gave them everything they needed to live a comfortable life.  I love that she also doesn't give herself any excuses when it was time to stand up to her father.

Setting character dynamics aside--and there are a lot of character dynamics in this book--I very much enjoyed the entire suspenseful progression, following Owen, Penny, and Cruz as they make their way through the Badlands.  This story just keeps moving forward without a chance to stop for breath, and when all is said and done, we just kind of drift to an end in a well-outlined way.

If there is one thing I would point out, it would be the logic hole in the kidnappers hauling Owen along for the ride in the scheme.  Though I suppose, in a way, Owen's brother had been expecting him to turn around and help them with the kidnapping and ransom?  I suppose I would have been a little less forgiving if that reason hadn't been presented, since it seems highly foolish to kidnap the targeted rich girl and her bodyguard as well.

I loved this book, nonetheless, and I'm glad that I finally had a chance to get to it.  And in spite of how much I really disliked some of the characters, it occurs to me that they didn't take away from my enjoyment of Badlands, and in fact, kind of enhanced my satisfaction.

Jill Sorenson writes in a way that is real and down-to-earth, gritty and intense, and just keeps you hooked from the beginning until the end, with characters that are not the usual, larger-than-life romance novel types.