Brief Thoughts: Borrower of the Night 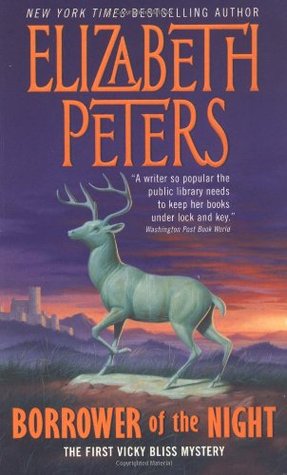 Borrower of the Night


On a side note, I actually listened to the audio book narrated by Barbara Rosenblat, but the cover I'm using is that for either a paperback or e-book version.  Simply put, I just didn't like the audio book cover, which you can find if you click on the link I've provided above on the "audio book narrated by" line.
Meet art historian Vicky Bliss.  She is as beautiful as she is brainy--with unassailable courage, insatiable curiosity, and an expertise in lost museum treasures that often leads her into the most dangerous of situations.

A missing masterwork in wood, the last creation of a master carver who died in the violent tumult of the sixteenth century, may be hidden in a medieval German castle in the town of Rothenburg.  The prize has called to Vicky Bliss, drawing her and an arrogant male colleague into the forbidding citadel and its dark secrets.  But the treasure hunt soon turns deadly.  Here, where the blood of the long forgotten damned stains ancient stones, Vicky must face two equally perilous possibilities.  Either a powerful supernatural evil inhabits this place. . . or someone frighteningly real is willing to kill for what Vicky is determined to find.


It took some time before the book actually picked up, so while it spent some time dragging, it DID eventually start becoming enjoyable.  But for the most part, it was a bit boring, and I had some trouble really relating with the characters; though Vicky was pretty fun at some points, but I wonder if it's because Barbara Rosenblat was able to bring the dryness of Vicky's narration and humor to the front.  I had considered whether or not I should read this book (or others in the series) in print to see if it would have made much of a difference.

I love a lot of things that have to do with anthropology, so I'd been looking forward to reading works by Elizabeth Peters, though I wonder if maybe I should have started with the Amelia Peabody books instead.  Not that this series is bad or anything.

Anyway, this book was just a so-so experience, even as some parts were fun and interesting.  The men were arrogant jerks that I had a hard time not rolling my eyes at.  Vicky had her moments of contradictory monologues, wherein it seemed she wasn't quite sure whether she wanted to be a feminist or "the little lady."

I hope this changes in future books, because I really loved the introduction wherein Vicky makes her stance known about how she loves men, but doesn't see that it's necessary to marry them.  But then she spends a good majority of the book lamenting the fact that all the men were paying more attention to the damsel of the book, Irma.  I wasn't quite sure Vicky was sure what she wanted.

But her tone was dry and sarcastic and fun to follow.

Then the ending was a little awkward.

All-in-all, this book was entertaining in it's own way.