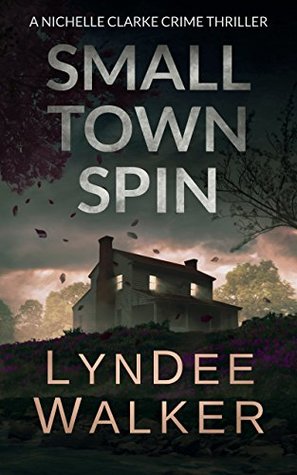 by LynDee Walker
Book 3 of A Nichelle Clarke Crime Thriller


A YOUNG ATHLETE IS DEAD.
A TRAGIC SUICIDE?  OR FOUL PLAY?

A retired NFL quarterback's teenage son is found dead on a rocky shoreline near his family's Virginia home, and crime reporter Nichelle Clarke is called in on special assignment to handle the delicate story.  Just yesterday, T.J. Okerson seemed destined to follow in his father's footsteps towards gridiron glory.  Now his parents, close friends to one of Nichelle's inner circle, are blind-sided and grieving.

The sheriff of the sleepy Chesapeake Bay town is ready to stamp the case a tragic drug overdose and move on.  But Nichelle isn't so sure.

Determined and unafraid, she dives into the seedier side of the quaint island community.  Nichelle's investigation reveals an underground moonshine operation--and more suspicious deaths.  Soon she finds herself confronting a killer who will stop at nothing to keep Nichelle from uncovering the truth.


Small Town Spin is another solid story in this well-written cozy series that I'm happy to have been recommended.  As per usual, I love Nichelle's thought process whenever she starts investigating each case, and I love that she's so resourceful and confident.  I also appreciate the fact that Nichelle has kind of learned from her previous experiences and indeed DOES try not to be the TSTL.  As she mentions, she's not exactly looking to get herself killed or anything.  She just wants her story.

Unfortunately, danger just seems to keep popping up because she's so determined to get to the truth of each story.

Of all the books so far, I kind of feel like this is one with a meatier plot than the rest.  It's quite thought-provoking, even if the entire detailed outline of the murder mystery was quite convoluted.  Maybe Nichelle was following too many trails, I don't know.

Still, this was highly enjoyable!

On a side note:  the love triangle is quite prominent in this particular book than it had been in the previous.  I suppose I understand Nichelle's need to play the field a little bit.  But something about triangles just really ruffle me up.

On another side note:  I was chatting with my BFF about this series, wanting to introduce her to it if she were in the mood for a new cozy.  The topic of the love triangle came up, and then I suddenly admitted that I was really hoping that Nichelle and fellow reporter, sports persona Grant Parker would end up together.  I'm sure that's not going to happen, because the two have already friend-zoned each other; AND Parker is in a committed relationship.  Also, a lot of other readers seem to be rooting for the mafia boss...

But anyway, I just felt like Parker and Nichelle just clicked really well, especially after they finally started communicating more properly at the end of the first book.  Now the two are sort of partners in crime as he had helped her out, both in the previous book and this one.  And they seem to really understand each other.

While love interests, Joey and Kyle, will just tell Nichelle she needs to stop getting herself into trouble, Parker will offer his services to aid her investigative efforts.  I think I like that he doesn't immediately try to coddle her... then again, he's also not playing the role of over-protective potential boyfriend.

Anyway, another entertaining installment to the Nichelle Clarke series, and three more to go!