Quick Thoughts: Rumor Has It 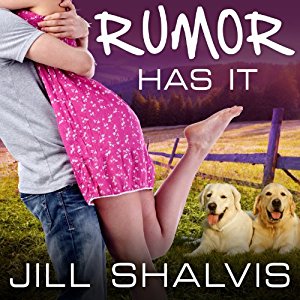 
He'll help unleash the new woman in her...

Special Ops soldier Griffin Reid doesn’t exactly have happy memories of growing up in Sunshine, Idaho.  He's only come back to recover from a war injury, and while he refuses to admit he’s in a weakened state, he finds comfort in the last person he'd expect.

Kate Evans teaches fourth grade science in Sunshine, the place she's always called home.  Dreaming of graduate school and a happily-ever-after, she’s desperate to break out of the monotony of Sunshine.  Luckily, a certain sexy man has just come back into her life.

To Griffin, Kate as always been his little sister's friend, but now he's finding her to be so much more.  As both attempt to forge their paths, they must decide if their passionate connection can turn into something lasting...


Well, Rumor Has It was definitely a lot more enjoyable than the preceding book in this series, Rescue My Heart, had been.  And then I determined that, it really wasn't just the book itself, but the heroine of Rescue My Heart, Holly Reid, was just plain annoying; case in point, I had an immense problem with her meddling, bossy attitude in this book, even if the story played it off as her being over protective of her best friend.

But this book wasn't about Holly, thank goodness, but her super nerdy (and super cool) best friend, Kate Evans.  Kate teaches elementary school, and has the uncanny bad habit of spouting science facts when she gets really nervous.  So when her long time crush, Griffin Reid comes back into town, she finds herself spouting all sorts of different science facts, whether they are nerdy facts, cool facts, or even some naughty, more lascivious facts.

Kate is like a woman after my own heart, with her no-nonsense personality, and her penchant for seeing good in all people, without letting anyone walk all over her.  But she's also got this strange need to take care of everyone in her orbit, which doesn't exclude Griffin when she learns about the injuries he'd gotten while fighting war overseas.

I definitely love the development of the relationship between Kate and Griffin, even though Griffin could really use a reality check (as could everyone else in the book) about their perception of Kate.  It seems that because Kate is such a sweet, lovable person, everyone and their mothers seemed to think she couldn't handle a one night stand with a man she'd always had a thing for, and I actually DID kind of find it amusing when Griffin clambered over himself to make sure Kate was okay and NOT pining over him after they have sex.  I loved that Kate kind of just put him in his place, with her, "Well, all I wanted was to have a bit of fun.  And that's what we did."

The book progressed very smoothly from one anecdote to another, with an underlying conflict in the background that sort of got a little too emotional for my liking by the time the ending rolled around.  I thought it was a nice touch, except I didn't care for how soap opera it kind of got at the end there with Griffin.

Once again, Thing One and Thing Two are absolutely the coolest names for the two dogs owned by Griffin's father.  I would totally get myself a pair of dogs and name them 'Thing One' and 'Thing Two' if I could handle raising two dogs together.  As it is, our one little puppy drives the family batty enough.

Kate's younger brother Tommy was all kinds of adorable, and I loved how he took after his elder sister so closely--spouting random science facts, trying to take care of or rescue other people, just being a plain weird kid.  And I love how Tommy doesn't seem to really care what the other kids think about him or say about him; he kind of just lets the insults roll off his shoulder, and will sometimes throw something back at the other kids, a phrase or a science fact so strange that no one really knows how to respond.

I wish we could have seen more of some of the previous characters in this series, but we were mainly stuck with Holly and Adam.  And while Adam's presence was a bit more mellow, Holly's frustrating, meddling, annoying personality didn't seem to dim much until a little over halfway through the book.  Even NOT being the main character, Holly managed to make me groan in frustration.

I was actually kind of ecstatic when she and Adam disappeared for part of the book on their honeymoon.

Anyway, Rumor Has It was a pretty enjoyable, sometimes insightful contemporary romance.  Most especially, I loved Kate.  Even though she spends more time taking care of other people instead of herself, never say that she didn't know how to stand up for herself, and keep others from walking all over her.  Griffin was a nice bonus, and the romance was fun, but truth be told, as an individual, Kate was the greatest thing about this book!