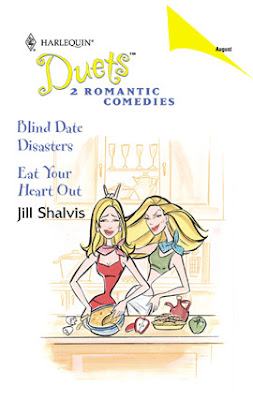 
Blind Date Disasters
As an interior designer and an identical twin, Cami Anderson wants her home to be unique, so she hires a master carpenter to help.  She's expecting an older man, someone kindly, experienced.  In her wildest dreams, she hasn't figured on Tanner McCall, who's not old, not kind, but most definitely experienced... and seems more than a little interested in her blind date disasters!

Eat Your Heart Out
Dimi Anderson may be a TV personality, but she's never had the pizzazz possessed by her twin sister.  And pizzazz--read sex appeal--is what her new producer, Mitchell Knight, thinks is missing from her cooking show.  So, not only does Dimi get a radical makeover, she also gets Mitch as an on-air sidekick who really turns up the heat....

The first novella was cute and breezy, and I found myself enjoying it.  There were a few quibbles, but whatever--I enjoyed myself.

The second book made me angry if only because of how it gives me the message that Dimi would never be successful in her cooking show unless she was turned into a "Sex Kitten."  I liked that she learned to be happier, and felt more free to do as she wished with her own cooking show, but I felt like the "Sex Kitten" emphasis was unnecessary.

Getting on my feminist soap box here: this novella just further objectifies women in media, giving the impression that no one cares how well of a cook Dimi is unless she can also flash some cleavage and leg for the audience.  Women aren't taken seriously already, and are expected to be "Sex Goddesses" or "Sex Kittens" or some other type of "Sexy Something" in order for anyone to pay attention to them in media.

And to top it off, a man had to intervene to show Dimi how to become sexier.

And while I agree that humor and sex definitely DOES attract the ratings, it doesn't change the fact that Dimi's transition really did nothing for her cooking show, BUT attract ratings.  This is important in television, I understand.  But from the questions and the newspaper articles that are mentioned throughout the novella, her image change did nothing to make people take her seriously as television cooking show host.  Instead, everyone was more interested in her relationship status with Mitch, or her new wardrobe, and etc.  The one live caller to the show didn't even care that Dimi's show is a cooking show.

Soapbox aside, the second novella felt rushed and incomplete anyway.  I have the distinct feeling this is a book that our beloved author probably slept through when she wrote it.

It's a shame that the overall rating of this duet got pulled down by one of the novellas in it, because the first one was actually, as I already stated quite enjoyable, fun, cute and breezy.  Not that it's memorable, but I smiled and had my share of feels and was entertained.