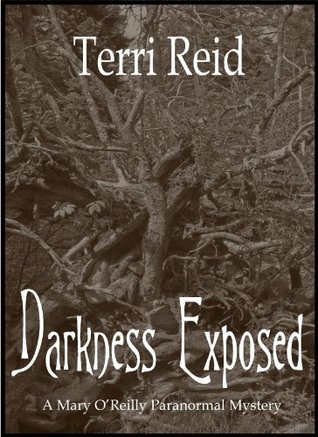 
Jeannine appeared in the room across from Mary.  Her face was streaked with tears and she was visibly trembling.  “Mary, I remembered,” she cried.  “I remembered and it was awful.”


I can't say that this is the best book in the series, but at least we finally get some closure on the Police Chief, Bradley Alden's missing/murdered wife, Jeannine.  Terrifying secrets are revealed about the "good" neighbors living in Bradley's old neighborhood surrounding Jeannine's death.  With Jeannine's ghost remembering certain details of what might have happened to her eight years ago, Mary and her new acquaintance, Ian MacDougal (who is a Scottish hottie professor who also sees ghosts and studies the paranormal in conjunction with criminal investigation) pose as a couple moving into Bradley's old home to investigate Jeannine's death.

I can't say that the mystery was very secret after the first encounters with each neighbor occurs.  I almost immediately pinpointed the culprit and found it amusing that the rest of the neighbors gave off even creepier vibes as suspects.  Nonetheless, it was still an interesting follow-up to the conflict following Bradley for eight years, finally giving closure to his wife's mystery.

On the side, we are given a not-so-distracting side story involving an arsonist.  While the two cases do not tie together, there are certain elements concerning idealism, emotion, as well as the supernatural that sort of (if you really want to make that connection) ties the two cases together (not really, but I try because it makes me feel happier).

Once again, as always, my one favorite factor of the Mary O'Reilly series keeping me in enjoyment is none other than the characters.  So even if the plot runs flat, I still really enjoy following the world of Mary and all of her companions.  I can't say that I'm a hundred percent in like with Bradley Alden (he seems like standard male hero creation, which is fine and safe), but the rest of the men (living or dead) appeal to me so much more than he does.  Mike Richards, the fireman ghost, kind of takes a slight backseat in this particular story when it seems he can't seem to follow Mary away from Freeport, so I was a little disappointed.  He still gets some book time though, so that's not too bad.

Ian turned out to be a delight to have as a new partner for Mary's ghostly investigations with his studies and knowledge as well as the ability to see ghosts as well.  What I'm really appreciating is that the author doesn't try to incorporate unnecessary love triangles; Ian has a sweetheart back home in Scotland and he makes rather clear that he is very much in love with his fiancee Gillian.  There is no romantic tension show between him and Mary; for instance, when they kiss each other (while it came as a surprise to me that they did it so naturally without hesitation) in front of the neighbors, they both agree that it doesn't feel awkward because there's no spark (like kissing a sibling; though how many people know a pair of siblings to actually kiss each other on the lips?).  HOWEVER, I let that one slip by and just contribute it to the author's need to emphasize that there will be no romantic conflict going on to interfere with the resident main couple.  While it's a little forced (because who wouldn't feel flustered around a black spandex shirt wearing Scottish professor with an accent and those darned "man boobies"?)  I just appreciate that there seems to be no inclination towards a love triangle.  Love triangles are one of the few tropes of romances that I really, really don't care for, even if I'll accept it under reasonable circumstances.

While I still love Rosie and Stanley, there are some points in the book where I sort of wished that they weren't trying to portray the meddlesome, nagging grandparent-types.  They became too overprotective of Mary (even if for good reason) but those instances didn't seem to really sit as very significant aside from showing that they are indeed Mary's best friends who care for her well-being.  But Mary has enough people worrying about her well-being already without her two best friends trying to talk her out of doing things that they darn well know she won't budge from.  I'm just saying, as best friends, sometimes even if you know your best friend is doing something stupid, you know that saying something isn't going to change his or her mind at all.  Then again, I guess it doesn't hurt to keep trying and being insistent.

Finally, there's Jeannine whom I really found I liked a lot.  She had a great personality, young and witty and I found myself thinking that it was a pity that she was both dead AND Bradley's wife.  She and Mary had great conversation and understanding of one another and would have made a very interesting pair (in an alternate universe of Mary O'Reilly fun, Jeannine and Mary would have made a great set of best friends).

On an end note about the characters, we get to see Sean O'Reilly a bit more too, but still not enough to satisfy my own wants.  I'm almost hoping that Ms. Terri Reid might consider making Sean a main player in one of future projects?  Just a thought. I don't know why, but despite not seeing much of him, I really do like this guy--maybe because he's that ideal protective big brother I've always wished for, or maybe because of the fact that he's protective but not too overbearing, or maybe just because he's got a "sibling-evil" type personality wherein, even though he spends time protecting the baby sister, he doesn't hold back from being the jerk that big brothers can be when teasing for good old sibling rivalry fun.

Of course, I must say, I'm thinking that if not for the straight forward, well-paced progression of these short novels, as well as the emphasis on the mysteries and the supernatural, the characters might fall flat for most readers.  What I'm starting to pick up is that, while each character indeed possess their own distinct personalities, they also tend to all have the same personality as well.  I'm not sure how to explain it so that it makes sense, but sometimes I feel like the characters are too perfect: everyone has the same justice-seeking idealism, good morale, comprehensible and understanding bantering and witticisms, hero-like qualities...  I could go on and without certain defining character traits, such as Mary's stubborn ex-Chicago police tough girl pride,  Bradley's overprotective male ego ideals, or even Mike the fireman ghost's smarmy and flirtatious charm, I probably wouldn't be able to tell one voice from another.

This particular trait plays in favor of the Mary O'Reilly world as well as becomes a disadvantage.  The disadvantage shows in that it cannot quite stand alone as a unique world full of unique people without the supernatural and mystery elements as well as the author's own witticisms to hold it up.  I have never read a book (or five books) where almost every character who is significant to the world is completely likable without any annoying, defining character flaws.  Bradley comes a bit close to it, but I overlook that for his love line with Mary.

Otherwise, everyone in this universe who has anything to do with Mary and her mysteries are almost too perfect to be true.  It's a good thing and a bad thing--the bad being what I've mentioned already.  The good thing about how these characters are created: I love all of them (as I've stated time and time again).  There's no harm in following a group of exceptionally likable characters; my own preference is that I really don't care for angsty confrontations if they can be avoided, though I know that a lot of people like that emotional tension between characters.  But everyone in this universe like each other within Mary's supernatural mystery investigation clique, which is nice and safe.  For one, I don't mind it too much just because then we don't take away from the mysteries by including too many unnecessary relationship conflicts.

Still, the world just seems too perfect, but I guess when you're someone who sees ghosts all the time and have to try to survive the murderers in almost every book, no conflicts among the usual round of characters in your clique is probably a good thing.  I know, I'm hard to please and can get a bit contradictory, but the ultimate deal is, I still really, really like this series and will continue to follow the books (and hope that Sean O'Reilly gets to be seen more often).


This review was originally posted at Goodreads in March 2012.