One more book since my last update, but I wanted to announce two more BINGOs before the Thursday drawing.  I suppose if I manage to finish reading Maddy Clare before the drawing tomorrow I can make yet another update post, but I really doubt that will happen.

The review for And Then There Were None will probably be posted sometime this week, though I'm not entire sure how I will review that little gem. 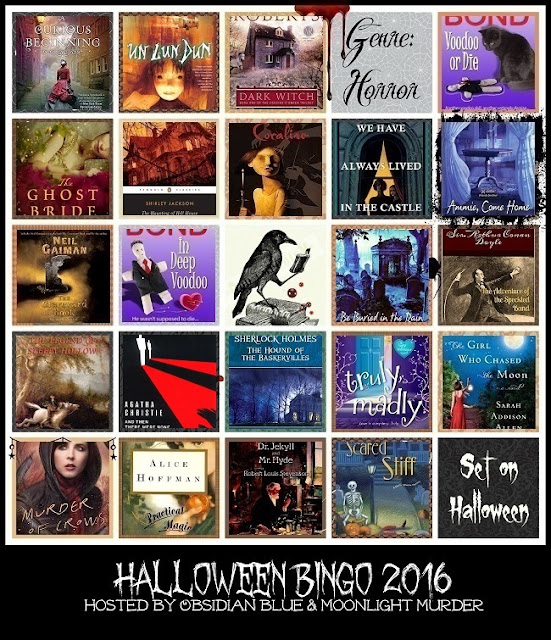 Grave or Graveyard:  The Graveyard Book by Neil Gaiman
Genre: Mystery:  In Deep Voodoo by Stephanie Bond
Gothic:  Be Buried in the Rain by Barbara Michaels
Creepy Crawlies:  The Adventure of the Speckled Band by Sir A.C. Doyle

"Fall" into a good book:  The Legend of Sleepy Hollow by Washington Irving
Locked Room Mystery:  And Then There Were None by Agatha Christie
It was a dark and stormy night:  The Hound of the Baskervilles by A.C. Doyle
Set in New England:  Truly, Madly by Heather Webber
Full Moon:  The Girl Who Chased the Moon by Sarah Addison Allen

Planned Next Reads:
Beg for Mercy by Jami Alden || Free Space
The Halloween Tree by Ray Bradbury || Set on Halloween