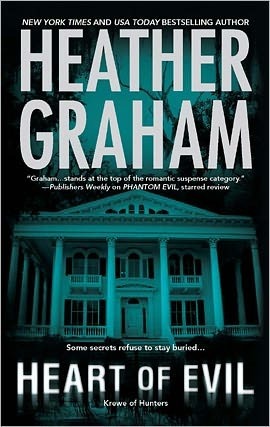 by Heather Graham
Book 2 of Krewe of Hunters


Emerging from the bayou like an apparition, Donegal Plantation is known for its unsurpassed dining, captivating atmosphere, haunting legends and now a corpse swinging from the marble angel that marks its cemetery's most majestic vault.  A corpse discovered in nearly the same situation as that of Marshall Donegal, the patriarch killed in a skirmish just before the Civil War.

Desperate for help traditional criminologists could never provide, plantation heiress Ashley Donegal turns to an elite team of paranormal investigators who blend hard forensics with rare & often inexplicable intuition.  Among the Krewe of Hunters is an old flame, Jake Mallory, a gifted musician with talent stretching far beyond the realm of the physical, and a few dark ghosts of his own.

The evil the team unveils has the power to shake the plantation to its very core.  Jake and Ashley are forced to risk everything to unravel secrets that will not stay buried even in death.


I hesitate to file this book under suspense or thriller because it just didn't seem that way.  My updates on Goodreads pretty much tell it all about what I thought of this book.  But here's a paraphrased (or expanded, I guess) summation:

1)  It started off extremely slow with too much world building and story set up.  This is book number two in the series and we shouldn't still be on world building at this point.  Normally I don't mind a little bit of world building depending on how much I need to understand of the world.  But this is a contemporary setting with paranormal elements.  I don't think I needed to know all that much about the lives and the personalities and the lineage of all the Donegal Plantation re-enactors unless it was important to the plot, because in the end, they didn't seem all that significant anyway.  In fact, a slow reveal of each person's tie to the plantation would have been much more appreciated rather than multiple information dumps, all at once.

And as I had mentioned:  It's not like I psychotically NEED someone to be murdered within the first five minutes of the book; but to go on for approximately 100+ pages without a prominent death makes me question the murder mystery's significance.  It's a little sad (and disturbing, maybe) that when someone finally died, I actually let out a sigh of relief--especially since we all knew that Charles Osgood was going to be the murder victim since Chapter 1.  I mean, it practically says so in the summary blurb.  His death and the planning of his death got dragged on for so long that I really didn't feel any shock or surprise or much of anything when his body was discovered.


2)  For the life of me, I could not make myself like Ashley Donegal.  She was a selfish, weak, frustrating, and entitled woman.  And, while I hate to spoil anything, this is a plot point we expect anyway:

I think she should have had to fight to win Jake back, especially after realizing that he's not really a scary freak who speaks to ghosts, since she ends up seeing her dead ancestor clear as day. And she talks to him, too.


There were some points where she might have redeemed herself in my eyes, but somehow, those moments didn't make me like her anymore than I could have.


3)  Why are all the women in these books so freakin' beautiful?  I mean, I'm not against having beautiful people in fictional settings regularly (goodness knows, I read enough YA fiction to realize that every girl and boy is hot or sexy or pretty or cute).  And this is a fictional world after all, so we get free reign to decide that our main characters are freakin' beautiful.  I get all of that, so it's fine with me.  But, goodness, do I need to be told over and over and over again just how beautiful and elegant and classy Ashley Donegal is?  Do I need to be told that Angela is a freakin' Disney princess toting a gun like the best of them three or four times?  I mean, while it's pretty badass--a Disney princess toting a gun, that is--is it necessary in a mystery novel to constantly remind the readers that your characters are all freakin' beautiful?  Several times?


Anyway, aside from those main three rants, I'm really not too disgusted with this book.  I know, it sounds like I feel otherwise, but truth be told, there were a lot of moments that I actually enjoyed some of the goings on of Heart of Evil.  It was a good ol' murder mystery surrounding some paranormal happenings.  And to be honest, I really like the historical aspects of both Heart of Evil and Phantom Evil.  The murder mystery itself wasn't too bad either, if slightly sloppy and predictable.

Finally, for a book full of ghosts, I didn't really feel much of a chill as I did for Phantom Evil.  I'm fine with that since I'm not drawn to horrors or the like.

I like the Krewe enough and will probably continue on to read the next two books in this first set of Krewe of Hunters books: Whitney and Jenna are both on good terms with me, so I'm interested in their parts of the series coming up in the next two books.


This review was originally posted at Goodreads in May 2013.