I've been making a routine of posting a Bingo update every Sunday at Booklikes, but found myself deliberating whether to put it off or do a second update over there this week since I knew I'd be finishing The Ghost Bride--I just didn't know when I'd finish reading it for that first BINGO.  But with Booklikes being down yesterday, I guess it gave me a chance to finish reading my book and prepare my update for today instead!

So I finally got my first BINGO after a nice scenic tour around my card, as everyone can see!  Two BINGOs in fact, with the first column up-down and the second row going across.

The Ghost Bride took me a lot longer to finish reading than I had anticipated, throwing my Bingo card plans completely off schedule...

I will have reviews for The Ghost Bride and Practical Magic up within the week, hopefully. 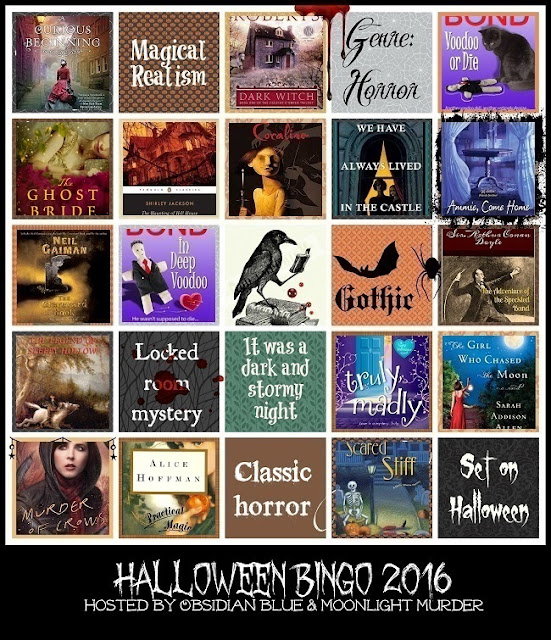 Grave or Graveyard:  The Graveyard Book by Neil Gaiman
Genre: Mystery:  In Deep Voodoo by Stephanie Bond
Creepy Crawlies:  The Adventure of the Speckled Band by Sir A.C. Doyle

"Fall" into a good book:  The Legend of Sleepy Hollow by Washington Irving
Set in New England:  Truly, Madly by Heather Webber
Full Moon:  The Girl Who Chased the Moon by Sarah Addison Allen


Currently Reading:
The Hound of the Baskervilles by A.C. Doyle || It was a dark and stormy night
Be Buried in the Rain by Barbara Michaels || Gothic

Planned Next Reads:
And Then There Were None by Agatha Christie || Locked Room Mystery
Un Lun Dun by China Mieville || Magical Realism
The Strange Case of Dr. Jekyll and Mr. Hyde by Robert Louis Stevenson || Classic Horror
The Haunting of Maddy Clare by Simone St. James || Genre: Horror
Beg for Mercy by Jami Alden || Free Space
The Halloween Tree by Ray Bradbury || Set on Halloween