Brief Thoughts: Thunder on the Right 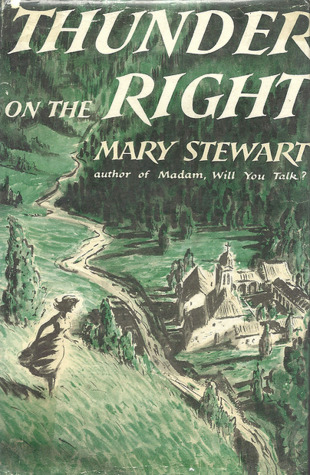 Thunder on the Right


Artist Jennifer Silver has come to the picturesque, secluded Valley of the Storms in the French Pyrenees to meet with a young cousin who is about to enter the convent there — only to discover that the young woman has died in a dreadful car accident.  Or did she?

Lies abound in this strange and frightening place, but seeking the truth could lead Jennifer to her own violent death.


This was probably not the better of the Mary Stewart books I've previously read, though to be honest, I had chosen to read this book based on random accessibility, whereas I went out of my way to pick a couple of Stewart's more widely loved novels to begin with before this one.  The truth is, this book was sort of filled with a lot of over dramatic scenes as the book progressed, which is a pity since the premise, the introduction, and the writing were all excellent to begin with.

Meanwhile, the characters didn't really do much for me, nor did the barely existent romance.

I will say, this book had a great sense of forward movement, as there was action and anticipation almost at every scene's end, so there was no dallying in that respect.  This book started in on the story and just kept moving forward; coupled with the well-written, yet somewhat purple-y prose, it made for a rather easy to read experience.

Nonetheless, I don't think I've come across a Mary Stewart novel I didn't like, and this one is no different.  It may not have been her best, but it certainly was entertaining.