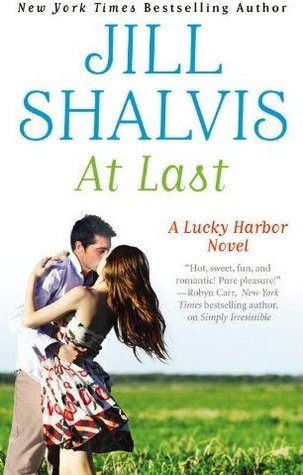 
HER LOVE HAS COME ALONG...

Amy Michaels loves her new life in Lucky Harbor.  A waitress in the local diner, she's looking forward to her first weekend hike through the mountains.  But when a wrong turn takes her off the trail, she finds herself up close and personal with forest ranger Matt Bowers.  And even though she's tempted to kiss that sexy smile right off his face, she won't make the mistake of getting involved with the town heartthrob.

A former cop whose life went south, Matt doesn't let anyone get too close.  But something about the feisty beauty caught his eye the moment he first saw her in the diner.  After a hot night under a starry sky, Matt can't deny their attraction--or the fact that for the first time in a long time, he feels the stirrings of something more.  Now it's up to Matt to help Amy see that, no matter what is in their past, together they can build a future in Lucky Harbor.


To be honest, the 'Chocoholics' aren't exactly my favorite trio of girlfriends in Shalvis' Lucky Harbor world.  And I know that they're only the second trio we've met so far (the first being the three half-sisters, Maddie, Tara, and Chloe), but I am honestly not really digging their chemistry as a set of BFFs who were mere strangers not long ago, who just clicked one snowy night, and began their best friendship.  At least I'm not digging them as much as I loved the half-sisters from the first three books--they're quite the high standard to live up to, truth be told.

And the previous book with one-third of the 'Chocoholics', Mallory, didn't really cut it all that much either.

But enough about that... though I needed something else to say aside from simply acknowledging that I enjoyed this book, even though it was the standard Jill Shalvis formula.  In fact, I think I've read this romance by her before, and it is one of the more frustrating ones.  In double fact, the romance schematics almost kind of tie in with the 'Chocoholics' and their own friendship schematics.

None of these women want to talk about themselves.  And while I understand the underlying reasons--damaged past, painful memories, deep dark secrets, etc...--I don't always have to like how frequently these same tropes are used to create angst and tension between character relationships.  Because one of the reasons why the 'Chocoholics' trio doesn't work for me is how one-sided each friend is in her pursuit of friendship--she expects the others to spill secrets and information, but when pressed, refuses to divulge anything about herself, then gets all broody and butt-hurt about it.

It seems that the little love story between our main couple, Amy and Matt, lives on the same vein.  And to be honest, it's kind of frustrating to watch them brood and second guess and jump to conclusions every other page.  This relationship is dysfunctional as a rule, because everyone is the authority on how everyone else thinks without first talking to each other.

Don't get me wrong, though:  As a Jill Shalvis book, the characters were quite lovely... until they started getting frustrating.  Outside of the main romantic conflict, when Matt and Amy DID interact or hook up, their chemistry was both sweet and explosive--which I'm not complaining about, really.

I suppose I'd be lying if I claimed that I DIDN'T enjoy this book, though.  My reading slump that started two months ago is still kind of crawling along, but I did manage to fly through a good majority of At Last if only because it's written well and told in the typical Jill Shalvis style--with lots of heart-warming moments, witty exchanges, and the ever constant character interaction.  One thing I did find missing from this book though, had been the more consistent witty dialogue and subtly comical humor--in all honesty, the usual humor felt a little flat.

One thing I will give At Last credit for is the inspirational journey that Amy takes herself on.  It's a nice piece of self-revelation/finding oneself story trope.  And the inclusion of Riley as a reflection of Amy's past teenage self was a nice touch as well.

Again, those first three Lucky Harbor books are a hard bar to stand up against, but I really DO hope that the rest of the series will find a way to prove me wrong.

On a side note, I am flip-flopping on using this book as one for Romance Bingo 2017.  I will probably make a decision later, though I'm not entirely sure I can honestly justify a lot of Amy's actions as TSTL, though I came very close to doing as much at the beginning of the book.

Other squares this book may count for: