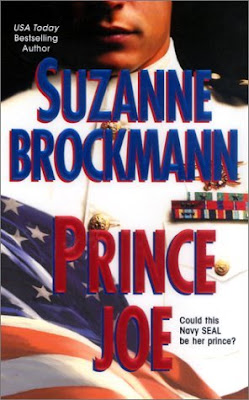 
*First of all, this is a warning of the long rant ahead.
**Second of all:  This is not a review, just a reading update.  But it sure looks like it could be a review, right?


I am becoming increasingly irritated with our main couple.  To the point where I contemplated throwing the book across the room several times.

And then I finally did.

If there ever was a couple who spent more time than anyone else jumping to conclusions, making pre-judged assumptions about one another...

I'm highly disappointed because I'd been looking forward to reading Prince Joe and Suzanne Brockmann's romantic suspense series.  They sounded interesting and had received a lot of really good reviews.

But all I'm getting is a potentially promising premise that sounded like it would be a lot of fun (a sort of gender-reversed "My Fair Lady" with a twist and added suspense), that is essentially ruined by the irritatingly, one-tracked, and frustratingly standard, predictable, cliched romance.  And while I'm not one to completely dismiss a romance for being just that, it's getting very hard not to thoroughly dislike both Veronica and Joe for the fact that neither of them are remotely likable people.

Veronica is exhibiting all forms of typical category romance damsel and cliched virginal heroine traits.  And she's also irrational and she's also wishy-washy about her principles.  I mean, it takes only one flash of "Oh, I might have said something to make Joe sad" for her to lose all sight of why she was rightfully angry at him in the first place.  Or all he has to do is touch her.

Joe is just plain patronizing, condescending, and arrogant.  He might be a nice guy, but that doesn't take away from the fact that he has yet to show that he's actually taking his mission seriously, or that he's taking Veronica seriously.  Why bother letting her hang around to "help transform him" into the perfect Prince Tedric body-and-persona double if he thinks he can do it all by himself just by reading some notes and watching some videos.  And if he really DOES believe he can get all of that done, then maybe he should just prove it and show her!

But neither of these two seem to have ANY intention of working together with each other because they're so caught up in their lust for each other or that "super special feeling that no other person has ever made them feel before", and their own stubborn righteousness about going about their jobs in their own ways.

How about just learning to work together and talking about the operation like civil teammates?  Which is pretty hard to do with Veronica thinks that Joe is a stubborn, uneducated commoner, and Joe believes Veronica to be a spoiled rich brat with a stick up her ass.  And neither of them are willing to just communicate in a professional manner.  On top of that, I'm also getting increasingly incensed with Joe's "Just let me do this my way, Little Lady.  You just sit tight and let the big boys handle the job."


This book is bite sized.  The first half has been nothing but dragged out monologues about how Joe and Veronica are lusting after each other.  And don't even get me started on how Joe is so convinced that the two of them are going to end up having sex no matter how many times Veronica tells him it's not going to happen.

The sad thing is, I know how this book is going to end.  I'm predicting that no matter that Joe's arrogant claims to being able to handle everything without really working with Veronica (or the rest of Prince Tedric's staff and security detail) sound like arrogant claims; in the end, it's all going to work out in Joe's favor because he's created as the typical Perfect Hero who knows everything and is right about everything 99% of the time.

That, right there, just makes me angry.