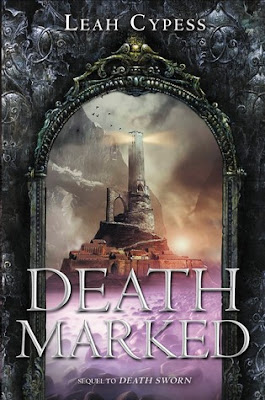 
A young sorceress’s entire life has been shaped to destroy the empire controlling her world. But if everything she knows is a lie, will she even want to fulfill her destiny? The sequel to Death Sworn is just as full of magic and surprising revelations, and will thrill fans of Leigh Bardugo and Robin LaFevers.

At seventeen, Ileni lost her magical power and was exiled to the hidden caves of the assassins. She never thought she would survive long. But she discovered she was always meant to end up, powerless, in the caves as part of an elder sorcerer’s plan to destroy the evil Empire they'd battled so long. Except that Ileni is not an assassin, and she doesn't want to be a weapon. And, after everything, she’s not even sure she knows the truth. Now, at the very heart of the Empire—its academy for sorcerers—the truth is what she seeks. What she finds challenges every belief she holds dear—and it threatens her fledgling romance with the young master of assassins.

Leah Cypess spins an intricate and beautiful conclusion to Ileni's story. In the end, it may not be the epic decisions that bring down an empire, but the small ones that pierce the heart.


My Thoughts:
I'm going by what I remember after finishing this book.  And to be totally honest, that was already months ago (two months ago?).  And even to present I still don't really have anything to say about this book and so what everyone gets is a summary blurb and a few sentences.

Because I honestly had no idea what was going on in this book at all.  I had thought that Ileni had already made a decision about her actions, but I guess she really hasn't.  So instead of the competent, kickass, yet powerless sorceress with resources and skills, we get a wishy-washy, indecisive, and STILL powerless (and now also weak and whiny) sorceress who has no idea what the heck she's doing.

Four months ago, I somehow managed to finish reading this book.  Four months into the present, I really have no recollection of what actually happened in this book aside from people dying for reasons and Ileni going back and forth about what she's supposed to do and where she stands.  I get she's trying to make her decisions on her own and not be influenced by others.  But, goodness, while she's floundering about who's side to stand on, and who's really the bad guy here, hundreds of people are continuing to die all around her.

It was kind of frustrating and I'm not entirely sure I know what she accomplished... or even what this book accomplished.