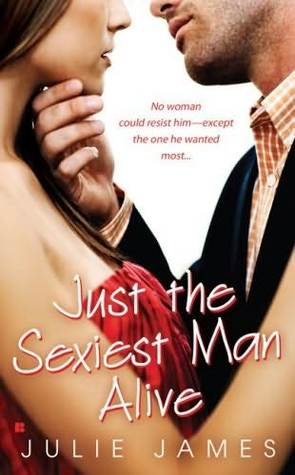 Nothing fazes Taylor Donovan.  In the courtroom she never lets the opposition see her sweat. In her personal life, she never lets any man rattle her–not even her cheating ex-fiancé.  So when she’s assigned to coach People’s “Sexiest Man Alive” for his role in his next big legal thriller, she refuses to fall for the Hollywood heartthrob’s charms.  Even if he is the Jason Andrews.

Jason Andrews is used to having women fall at his feet.  When Taylor Donovan gives him the cold shoulder, he’s thrown for a loop.  She’s unlike any other woman he’s ever met: uninterested in the limelight, seemingly immune to his advances, and shockingly capable of saying no to him.  She’s the perfect challenge.  And the more she rejects him, the more he begins to realize that she may just be his perfect match...


I read this book about two years ago.  And as far as I can remember, it wasn't exactly the most enjoyable Julie James book I've read.  It was probably a lucky thing that Just the Sexiest Man Alive wasn't the first Julie James contemporary I chose to pick up.  In fact, it was probably damn good luck that I started with her FBI/U.S. Attorney series--given her witty narrations and mature, fun, sexy characters, it was predictably easy to fall for her books.

Just the Sexiest Man Alive, however... I would have read this book and then brushed it off as stereotypical contemporary romance--nothing to write home about, nothing I'd be interested in pursuing from the same author.  There is nothing unique about these characters or the story line.

I love Julie James' following books.  She's taken to falling into more typical tropes lately, but her signature witty dialogues, fun banter, and mature adult characters are still present.  It makes it easy to like her books.

Except for this one.  As I state in the following first impression piece I wrote two years ago, I give this book leeway for being Julie James' debut novel.  You have rocky starts as debut novels.  But I'm just glad I didn't start reading Julie James with this one.

The rest of the book doesn't stray far from my first impression, either.  And so I'm going to stop here as whatever else I say (and have already said) just reiterates what I had already said two years ago.

I really like Julie James' writing style and have since I read Something About You and A Lot Like Love.  While expecting crime thriller/romantic suspense from her, those two books had read more like contemporary romances of the romantic comedy persuasion.  And I liked them a lot, mainly because of the witty banter between the characters and the dry humor floating amidst the narration.  They were a lot of fun.

I picked up Just the Sexiest Man Alive when the book dropped to a very agreeable price on Amazon Kindle books and on a whim, I just got around to starting it.  (It was a long morning, I had a lot of wait time, and I just felt like starting it.)

Unfortunately, while I enjoyed the two FBI/US Attorney series books a lot, this particular book strikes me as fairly amateurish, both in writing style, character development, and even story ideas.  I know I'm only a short ways into the story, so it's still too early to make any critiques, but the writing (while very Julie James in wit and banter) doesn't quite flow the way her other books do.  The characters are also standard contemporary romance stock -- predictable, monotonous, ideal carbon copy characters for this type of story.

This is to be expected, I guess, as Just the Sexiest Man Alive is her debut novel and seems to encompass all the romantic comedy ideals that lots of women love to imagine as their dream come true scenario.  Taylor Donovan is an independent woman, highly intelligent, and good at what she does as an attorney.  She gets thrown into a business set-up with the most popular celebrity of the moment, Jason Andrews, who, of course, finds her different and much more interesting than he's ever found other women he's been with.

This is probably one of the most clichéd and overused "Famous actor falls for common working woman" plot devices.  It's in the telling and the character development that has potential to make the story a good one, standing out from the rest.  So far, the dialogue is what's standing out for me, but otherwise, the narration meanders a lot and could stand a little clean-up.

But since I like Julie James, I'm interested in seeing how she manages this particular romantic comedy trope.  So I'm holding out hope that things will get a bit better, even if I have a feeling the style won't change much.  Nonetheless, it won't make me appreciate her any less.


This first impression was originally posted at Ani's Book Abyss / BookLikes in July 2014.