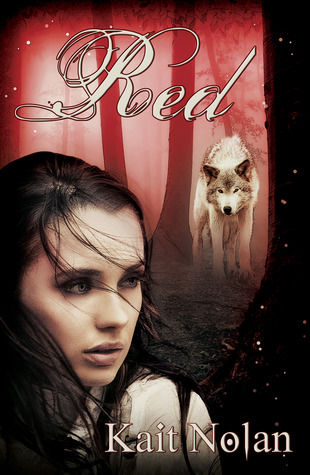 
**Side note:  I honestly don't think it took me a year to finish reading this book, so there must have been a glitch somewhere to do with the Goodreads database, but it DOES show me that I started reading the book in March of 2012 and finished it in March of 2013.  It is entirely possible, however, that I read the first few chapters, and then stopped, then came back to it a year later.  I've been known to do such things, and as stated in my review below, that's probably what happened.

Secondly, I read this book during a time when paranormal romances were big... and also, I might have written this review around the same time that I read the infamously celebrated paranormal romance Twilight... so I might have also been a bit biased.  Whether or not this book was as good as I remember it, I couldn't possible be certain.  But it must have been good enough for me to give it such a high rating.


Every fairy tale has a dark side...

Elodie Rose has a secret. Any day, she'll become a wolf and succumb to the violence that's cursed her family for centuries. For seventeen years she's hidden who and what she is. But now someone knows the truth and is determined to exterminate her family line. Living on borrowed time in the midst of this dangerous game of hide and seek, the last thing Elodie needs to do is fall in love. But Sawyer is determined to protect her, and the brooding, angry boy is more than what he seems. Can they outsmart a madman? And if they survive, will they find a way to beat the curse for good?


The actual rating is a 4.5 instead of a full out 5, but it borders so close to five that I decided to just give it a full out full stars.  I loved this book and hate that I didn't finish reading it the first time I started.  But there were still a few "hmm" factors that didn't quite hit it with me, except that I can't exactly pinpoint what it was.

I'm no good with reviews, so this will be short and sweet as I wax poetic about what I loved about this story.

First of all, I'm big on characters: their creation, their description, how well I can empathize with them from book start to finish, and the character interactions.  The writing style and the plot could be mediocre and I'd still be drawn in if the characters were created and developed wonderfully.  And to be honest, while at first I was uncertain about both Sawyer and Elodie, by the time I was 25% into the book, I was living both their plights and loving both of their tellings.  Granted, I'm not one for first person POVs--I much rather prefer third person.  Of course, the majority of the young adult novels I've read have been first person, so I set aside my bias and went with it.  In this case, there were TWO sets of first person POVs which took a little adjusting to; both voices were done rather well so that I could tell the difference between Elodie and Sawyer when it mattered.  Overall, I devoured this one and kept telling myself that I needed to finish this book because I desperately wanted to know how things would turn out for Elodie.  This is one of those times when I want to finish this book because I can't put it down and it's a good thing.  Other times it's not so great if I keep wondering WHEN the book will be finished--with Red, I hadn't even realized I was so far through it until I had no choice but to put the book down.

As much as I loved this story, however, I was rather frustrated with certain parts, such as the entire: "I'm a werewolf and I've fallen for a human and we can't be together" two-sided-ness of the entire situation.  It was intriguing at first and quite necessary to show both sides of the story and the anxiety and angst, but then it went on for a while and I just wanted them to find out about each other and get on with the mating, snuggly, smoochy romance stuff.

But aside from that (which was probably my own personal irritation anyway, because it didn't take away from the overall book itself) I really DID enjoy Red a lot.  I loved that Sawyer was such a great boyfriend in his domineering, alpha-male, stubborn way needing to protect Elodie.  But I also loved that Elodie was also completely capable of taking care of herself just fine; the two made up for each other's weaknesses on a very subtle level.  I mean, Elodie is a sixteen year old Search and Rescue team member with better survival skills in a wild life arena than most teenagers in a small city could even muster.  I think that's pretty awesome in itself.  She doesn't need a man to come to her rescue, because she'd be the one leading them out of a dense forest when they get lost.

At the very least (and I giggled a little bit) the "creepy stalker" vibes that Sawyer was giving off got addressed by both parties and acknowledged that: No, stalking and creeping around the girl's house to watch her is in NO way appropriate and borders on repulsion rather than romantic or charming.  But in this case, I give Sawyer a bit of leeway because he was doing it out of concern for Elodie's safety... not just, say, watching her sleep in her bedroom just because he could.  At least Sawyer feels bad about spying on her and he KNOWS it's creepy, even if he couldn't help himself with his alpha-wolf protective instincts and all.

At least he more than makes up for it by sticking to her side for better or for worse... oh yea, and he takes a bullet for her. I'm on board with this romance.

This has been a rather inelegant review... but I've been awake for nearing twenty hours (not just reading this book, but for other stuff like working eight hours), so I apologize for anything that doesn't really make much sense.  Or sounds trite.


This review was originally posted at Goodreads in March 2013.