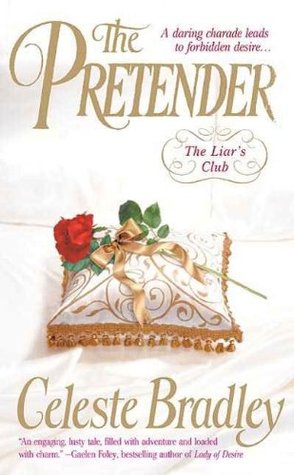 by Celeste Bradley
Book 1 of The Liar's Club

She had a secret she'd do anything to hide.
Agatha Cunnington, a headstrong beauty from the country, has come to London in search of her missing brother James.  The only clue she has is a cryptic letter signed The Griffin.  Agatha decides to disguise herself as a respectable married woman so that she can go about the city unnoticed.  But for her charade to work she needs a suitable "husband," preferably someone tall, elegant, and rakish—someone like Simon Montague Raines.

He had a secret he'd do anything to hide.
Simon Montague Raines, also known as The Magician, is a member of The Liar's Club, a renegade group of rogues and thieves in the service of the Crown.  When someone begins murdering members of the undercover cabal one by one, Simon is given the mission to bring in The Griffin, one of his comrades who is suspected of betraying his brothers.  Simon goes undercover and infiltrates the home of "Mrs." Agatha Applequist who he believes is the Griffin's mistress.  Before Simon knows what's happened, he finds himself irresistibly drawn to Agatha's soft, feminine charms--and he is tempted beyond reason to break the first rule of The Liar's Club: Never fall in love.


The Pretender started off really rocky, and I'll have to admit that there were moments in the beginning that I thought I'd end up frustrated with the book.  Our couple, as is typical of most romance novels, move from initial surprise meeting to insta-lust so quickly that I sort of got whiplash.  And then the lust continued to dominate most of their interactions and conversations and thoughts for a time.

Needless to say, I was definitely feeling a bit irritated with it.

But then, I can't quite pinpoint when, the story started getting interesting when things began to balance out.  Agatha started working with Simon in a strange little spy and investigation partnership rather than just issuing him his orders.  Simon started taking Agatha's abilities a little more seriously and the two sort of, unofficially accepted their strange partnership.

And while I would have loved for this weird tango of deceit and secrets to continue, I have to admit that the reveals and the twists in the middle of the book worked out quite well.  Nothing else seemed to change between the two save for a better understanding of each others' roles.

And as I was fully invested in both character's stories by then, I didn't care to nitpick too much more about the book as a whole.  Though I must admit that there were some moments (such as Agatha's multiple attempts to seduce Simon) that actually came out more comical, even in spite of the more serious tone of her own thought processes.  In creating these scenes however, I actually came to admire some of the more inelegant behaviors and actions of our two main characters (the scene where Agatha is unceremoniously thrust out of Simon's room in the nude is quite unforgettable, as I think about her having to make a stumbling sprint back to her own bedroom to avoid awkward discovery).

On a side note, Simon's attempts at evading seduction (a la the aforementioned scene where he extricates Agatha from his immediate quarters) were commendable.  But really, with Agatha's head-strong determination, the poor guy really didn't have a chance in the world of resistance.

I think this is what sort of made the book a bit more enticing to me--not the seduction process, no.  The characters were unique and interesting in their own ways, but their actions and antics were quite entertaining to follow.  Well, okay, it was really Agatha's antics I really enjoyed the most, what with her managing to make so much headway into ferreting out secrets and investigating her brother's disappearance within days, while Simon admits that it had taken him and his men much longer to even come up with some inkling of what might have happened to James Cunnington.

Agatha was a study in contradictions, really.  She believes herself to be ordinary and not a beauty.  But during her investigations, she tactfully uses her larger than average bosom size (a not so ordinary trait) to extract information from many of the salivating lords and gentlemen she interacts with.  She's written as a character who doesn't really have a deceitful bone in her body... and yet all of her behaviors are contradictory because she begins the book as a liar who creates a fake marriage and husband as part of her investigation strategy.

And yet, she's a readily likable character.  In contrast, Simon was rather ordinary and standard for a romance novel.

Other characters in The Pretender were also wonderfully crafted as well, and I can't wait to see if any of them play a role in following books.

Meanwhile, there were a few things about this book that didn't quite work out for me, thus the rather mediocre to blah rating.  But I can't deny that I enjoyed myself enough to want to continue on with the series.

The Pretender isn't the best book in the world, and definitely didn't start off all that well.  Others who would expect a great book within the first few chapters might get impatient, but I'm quite satisfied that it felt like our author seemed to find a direction and better footing in her writing process as the book itself progressed.  Though, to be honest, I can't help but note that the book DOES seem to feel like it could have been two, or maybe even three, different anecdotes when you get to the second half, even while the ending manages to tie things together well enough.

Roll #30:  "Read a book where a main character is in STEM, or where the author's first and last name contain all of the letters in 'Tesla'."