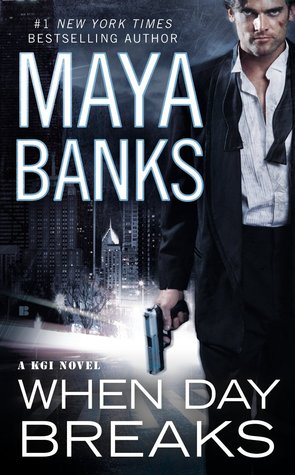 by Maya Banks
Book 9 of KGI


I really wanted to finish this book--just as much as I wanted to enjoy this book.  But I guess sometimes you need to learn to cut your losses and move on.

Maya Banks' KGI series has been quite enjoyable since the beginning.  Having loved the first three books and continuing to like the next couple books, I found a guilty pleasure read in following the warm and amusing Kelly family as each story progressed.  After all, these were fairly standard romantic suspense books with enough feels and enough whatever-else that made me really like them.

To be totally honest, I want to say that KGI started going down hill about two books ago (possibly earlier, but I hadn't really noticed until Forged In Steele).  Before then, we were still getting a good balance of action and suspense with the romance.  Sure, the dialogue started getting a bit smaltzy.  Sure, actions and conversations became very mushy.  But there was enough action to keep things exciting.

About two books ago, Forged In Steele began giving us full out mush.  There was just SO.  MUCH.  DIALOGUE.  It was hard to keep from rolling my eyes, or even taking the book seriously when our main couple started breaking out two pages worth of flowery love declarations that spanned eons of "meant to be" announcements in essay format.  I may have never been in a romantic relationship before myself, but people just don't talk like that--all poetic and repetitive and dramatic.

The next KGI book didn't fare any better either.  Wanna know what I liked and disliked?  Here's my review for After the Storm.


The Story in Brief:
When Day Breaks had a promising premise, even if not quite unique.  I'm always a fan of bodyguard story lines, and much like every other KGI fan out there, have been curious about the type of story that Swanny was going to be featured in.

Eden Sinclair is a top supermodel, touted as "the world's most beautiful woman."  Daryl "Swanny" Swanson is a current KGI operative, scarred inside and out from his captivity that he almost didn't survive.  Eden needs a top-notch security team to keep her safe, as her father requests.  During his military years working in black ops, a mission went FUBAR, subsequently putting a crime lord and his son on Daddy Sinclair's tail--his wife was killed, and now Eden is in danger.

And so KGI is called in to babysit.


My Rant:
What really bugged me about this book was pretty much everything since the first few pages.  How I even managed to make it so far was purely stubborn will to finish the book; after all, I have a special square on my COYER bingo card I'd been planning to insert When Day Breaks into.  And also, I wanted to persevere for Rusty's sake--I've always liked this particular character and would love to see what kind of story Banks will come up for her... but I'm afraid that's not going to happen now.  And with the way the books have been, I'm not even sure I want to know what will become of Rusty's story.

I was already leery of When Day Breaks upon the first description of Eden by her father.  And I agree with a lot of other reviewers out there that this book seems to be taking many, many pains to make sure people know that Eden isn't the stereotypical supermodel: that she's sweet and innocent and lovey and nice and she's pretty much a saint rather than a human being.  She walks into a room and sunshine and magic happens.  She is Mary Sue times ten, except for the fact that she's so malleable it's kind of sad.

Her father and brothers tell her to "just go with" their plans and not ask questions.  So she does.  They change her security detail from two guards to five, they hustle her off to bed and force her to take pain pills to help her sleep, they talk in cryptic sentences and hushed whispers around her.  They pretty much act out of character, as far as she knows, and she even suspects that there's something going on.  And so she asks one question, "What aren't you telling me?"  And when the answer is, "Nothing.  We're not keeping any secrets from you."  She's all "Oh, okay," and happily goes on her way.

The security detail from KGI is also a big joke as well.  I've seen a one man crew in other books set up better security than this entire team.  For one, they have her staying in a two bedroom suite with only one guard.  The rest of the team are staying in different hotel rooms.  That is three different rooms that they have to clear before going inside--that is a LOT of ground to cover, considering the kind of danger that's supposed to be lurking in the shadows out to take Eden's life.

At one point in the book, the KGI team rushes Eden back to the hotel after an entire morning and afternoon of modeling work.  So they have been away from the hotel an entire morning and afternoon.  And what does Swanny do?  He hustles Eden into her room and then LEAVES HER ALONE IN THERE, so he can rush off and have a quick meeting with his team.  Because the guy has sex on his brain and wants to get this meeting done and over with so he can get back to Eden as quickly as possible.  In the meantime, he just tells her to take a shower and get dressed for bed.

What kind of security firm leaves their client ALONE in a two bedroom suite without first clearing it and making sure some killer isn't lurking in the shadows?  This reeks of poor outlining.  No matter that the meeting was a brief one right next door, ANYTHING can happen in only a few seconds time--it doesn't take long for an intruder to take Eden and run off... or to slit her throat while she's showering.


But anyway, that's only the tip of what bothered me about this book.  The romance bugged me the most.  But the fact that the entire first half of the book is about nothing, but the romance kind of bugs me.  It's like, we've completely forgotten why KGI is even on this babysitting mission in the first case.  I've seen other bodyguard stories wherein the guard will balk at the idea of their client being in a place with a large crowd--because crowds make for a harder security detail to set up.  But no one in the entire KGI team even questions the fact that Eden needs to be at two different fancy dinner soirees where she'll be surrounded by people--people that KGI won't be able to keep tabs on during the night.

Let's face it, this book was mainly created to give Swanny a soul mate, and damn the rest of the book and logic.

Meanwhile, when the couple finally does have sex, it takes a whole chapter of dialogue between Swanny and Eden about how they both don't feel like they're good enough for the other, or how they're both equally afraid of being hurt, and how they view each other as "the most beautiful person" in the world, and blah, blah, blah, blah, blah... This went on for a whole chapter and then some!  Maybe.  I had to skip a few pages because I got tired of reading Swanny's inner dialogue about how he can't believe that Eden would want him, out of all the men she knew.  This particular mind ramble went on for two chapters at random, and still continued on after the two of them start having sex.

And even after Eden assures him that he's beautiful to her, he still continues to rehash the same inner dialogue about his scars and how it makes him ugly.  Blah, blah, blah...

And then continued to go on repeat.

And then halfway through sex, Swanny is still able to wax poetic for an entire paragraph or two about how he still doesn't believe he's good enough for Eden, how she's so beautiful, how he'll never hurt her, how he doesn't want to be just a distraction, and blah, blah, blah some more...  And then I skipped the rest of the sex scene to the next morning when Eden needed to leave for her next shoot.

I finally had a conversation about the book with my BFF, and we both wondered why I was even still reading the darn thing.  I read some other reviews to find that the rest of the book doesn't get any better--more stupid security goof-ups that would be unacceptable for an organization as powerful and strict as the KGI teams claim to be; more flowery prose declaring love and the like.

This kind of stuff really jars you out of the story and leaves you wondering whether you should be frustrated, amused, or resigned.

I'm definitely done with this book.  And I'm probable done with KGI.