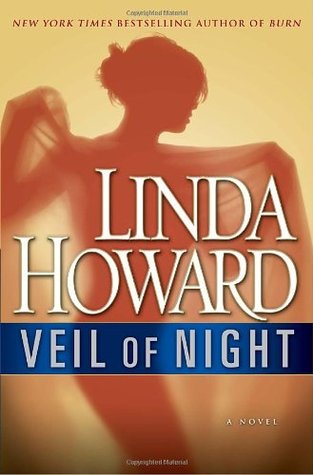 
The first time I picked up a Linda Howard book, the experience didn't go well for me.  But I don't like to blow off an author completely until I'm sure I will, one hundred percent, never read said author again.  Because in spite of the crazy chaos of the first Linda Howard book I chose to read, I still found the writing witty and serviceable.

Not long after that, I threw Veil of Night onto my reading list for good measure.

Veil of Night is probably the Linda Howard book I should have started reading first.  I've since then read another enjoyable book by Howard, but at the time, that book didn't exist.

Veil of Night isn't the best outlined book ever written, but it wouldn't have given me such a bad taste after reading it.  So I guess I'm glad for second chances.

Of course, after giving it some time to think things through, I DID find that, despite how enjoyable this book was, it didn't escape my notice how much some of the story events didn't sit well with me.


The Story:
Jaclyn Wilde is a wedding planner who is moving up in her business.  Owning and operating Premier with her mother has proven to be a great start to a great career.  Sure, she has to deal with the occasional bridezilla, like Carrie Edwards--a bride-to-be who seems to think the world revolves around her and her alone, and who also seems to thrive on making other people's lives difficult.  But Jaclyn also gets to deal with other, more agreeable bride's and their families, and seeing these wedding go off without any problems is enough to make her happy.

Of course, when Jaclyn's mother somehow manages to book six weddings in five days, life becomes hectic enough that Jaclyn finds herself re-evaluating her own relationship status when she runs into Detective Eric Wilde at a random moment.  Obviously there's an instant attraction, and after having a nice night of conversation with the possibilities of a relationship looming on the horizon, Jaclyn tells Eric to call her in about a week after her schedule calms down.

Except that neither of them really want to wait a week and end up in a night of steamy passion, again, with possibilities of continuing to see each other.

Then Carrie Edwards is killed and Jaclyn has become the main suspect of the murder.  Needless to say, this kind of puts a hitch in the possible relationship between her and Eric since he's the one investigating the murder.  But obviously, Jaclyn isn't the one who killed Carrie Edwards, no matter how difficult the bridezilla had been.  And Jaclyn might have even seen the killer who did it, even if she didn't really pay attention to the person who walked into the reception hall after she left.


My Thoughts:
There was a lot of story going on in this little book that seemed more like tangential events; none of it really furthered our murder investigation or the romance, but most of it had to do with different weddings that Jaclyn and her mother are planning.  The murder investigation itself comprised a third of the book while the romance was another third; the weddings were the last third, which, to be honest, is more than necessary for this book.  I would have been a little more satisfied if we had balanced the romance and the murder investigation more, and left out some of the details of each of the other weddings.  Because while the weddings were interesting to hear about, I'm not sure I needed a thorough run-down of all of them.

This book was enjoyable in the fact that the writing was excellent and the humor was evident.  There's a running gag (and I love running gags) about our brave detective's quest to get a decent cup of coffee; said quest typically ends up in him apprehending a petty criminal in an unconventional way because he doesn't want to deal with paperwork if he pulls his service weapon.  It's a humorous aside that I enjoyed very much.

There are also other running gags that weren't as enjoyable.  Because I love running gags until they get overused to the point of tediousness.  For instance, I liked that Eric monologues about the differences between real police work and flashy fiction police work on television.  But the subject kept getting brought up over and over again that I wanted to tell him that "I know, and I get it!"  Police work in real life isn't as flashy as CSI makes it seem.

On an aside, I know that forensic crime scene investigation is a lot more tedious and boring than television makes it seem because I had taken classes in college when I went for a Forensic Science degree.  There is definitely a lot of paperwork and documentation and signing of things and chain of custody and just all sorts of paperwork.

Anyway, back to the book--just the fact that I enjoyed it for whatever reason is enough for me not to blow off this author and continue picking up other books by Howard.

But I'm not going to deny that there were a lot of little things here and there that DID make me a bit conflicted about my enjoyment:

Along with the insta-love-y romance, the relationship between Jaclyn and Eric was just hard to grasp, actually.


One other thing that bugged me was Jaclyn's elitist ideals about wedding planning:

Aside from the above points, there really weren't other things that bothered me too much.  There might have been a loose end here and there, and the murder investigation kind of got solved out-of-the-blue without some concrete evidence to back it up.  But I'm content with the book, as far as I'm concerned.