Brief Thoughts: What the Dead Know 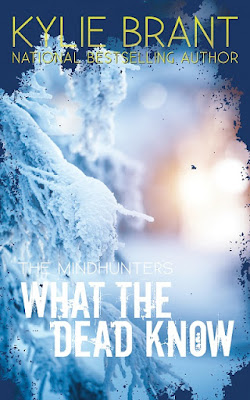 What the Dead Know


What the Dead Know is extremely fast-paced and continuously forward moving, as has always been the case with Kylie Brant's Mindhunters books. This one was better written and better edited than the previous, Secrets of the Dead; and it also involved a more focused premise, story telling, and progression.

The only fault I found with it, however, is the romance--the chemistry seems to be missing.


The Story:
Keira Saxon is lured into the game of a serial killer when she discovers that her father hadn't been killed in a wilderness attack by a bear--her father's liver is left in a cooler at her cabin door and Keira is led on a chase through the snowy woods, only to be attacked by the perpetrator.

Knowing that she is too close to this case, but not wanting to be left out of the loop Danny Saxon's now homicide investigation, Keira calls upon the aid of Adam Raiker's forensic investigation organization.

Enter Finn Carstens, an Mindhunter working for Adam Raiker who used to be a medical examiner. Along with Keira, the two discover that Keira's father wasn't the only murder victim and that their mysterious serial killer is playing a deadly game with human lives. And Keira is his ultimate targeted hunt.


My Thoughts:
Finn and Keira make for a great investigating team together, and this book brings back to mind one of my more favored Mindhunters installments, the very first Waking Nightmare and the investigating partnership between Ryne and Abby. Of course, Keira and Finn are less antagonistic to each other, readily creating that partnership bond and trust; unfortunately, at the same time, they also display a lot less romantic chemistry than I had been expecting for a romance.

There's an underlying OTP-ness to their slowly developing relationship, but I fail to FEEL how the two start to fall for each other. Even the sexual tension seems a bit lackluster--in comparison, the previous pair of Mindhunters in Secrets of the Dead, Eve and Declan, had a haphazard story and almost too tacky romantic conclusion, but they had chemistry.

Anyway... back to this book.

I thoroughly enjoyed the crime thriller aspect of it, even if I felt that the romance was not as developed. And, really, that's all I have left to say about it.

Once again, another great Kylie Brant romantic suspense to pass the time and enjoy--a very enjoyable, entertaining crime thriller to pass a cold night in December. I could just feel the chills radiating off of the snowy Michigan setting.


This review was originally posted at Ani's Book Abyss / BookLikes in January 2016.