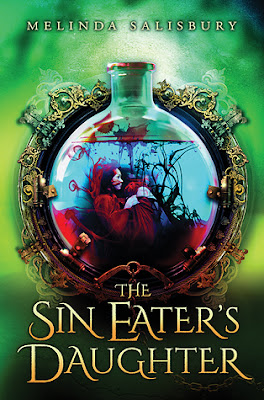 by Melinda Salisbury
Book 1 of The Sin Eater's Daughter


The only promising aspect of this book was that it had an interesting premise. Otherwise, The Sin Eater's Daughter was really just a fairly boring read with lots of unrelatable characters who are dramatic and make lots of bad decisions.


The Story:
Twylla is the Sin Eater's daughter, but for the past few years has lived in the castle as a legend come to life, Daunen Embodied, who is supposedly the reborn daughter of the Gods. She is immune to all poisons and can kill with her bare touch; as such, she is tasked as the executioner of all traitors of the kingdom. But as the story progresses, Twylla begins to learn that her status is not so much special, but she's really just a puppet being strung around by the evil queen who wants to continue ruling in glory. On top of that, the plot thickens (and thickens, and thickens, and thickens) as all of the evil queen's deceit is revealed to Twylla, little by little.


The Thoughts:
And honestly, not much else really happens. The Sin Eater's Daughter had a lot of potential to be an intriguing high fantasy with a kickass heroine who should have been more than a moping, pitiably boring doormat. But unfortunately, while the main conflict and the story's direction was quite clear, very little of the narration really helps to do much for the story's progression.

Honestly, the book wasn't really terrible and I didn't really hate it, per se. It was just pretty boring. The writing is decent and smooth, the conflict is attractive, if not the most unique, and the escalating of plot twists and secrets revealed had potential. But all of it together just felt really, really flat--like, I knew what was happening was supposed to be somewhat meaningful and exciting, but instead, I didn't really care enough to react.

The characters were like drama queens, the lot of them; a lot of the dialogue towards the ending seemed unnecessarily deliberate and theatrical.

But I somehow managed to get through the entire thing--it felt fairly short in comparison to other books I've been reading, which could have been a plus.


Final Thoughts: And despite my boredom, I was curious enough to finish the book. Despite my boredom I'm actually wondering about the rest of the series and what happens. But it doesn't escape me that I'm really 'meh' about the story line and the characters, especially Twylla.

As I've already stated, Twylla, especially, is dramatic about her situation and makes very bad decisions throughout the entire book and never learns from them. Most importantly, she was just a very boring heroine to follow even with all her dramatic claims of "Woe is me"--probably because of them.  I don't find her frustrating, really, because I'm not sure I cared enough about the goings on about the book to BE frustrated.  I'm just in a mellow 'meh' state with her and the book.

Things weren't terrible.  Things could have been good, but they weren't.  Simple as that.

And what about the part where she's the Sin Eater's daughter? Somehow, throughout the entire book, that point just didn't seem like it was all that significant. She could have been the Pig Farmer's Daughter, or the Random Pedestrian's Daughter, or even a little orphan girl and it probably wouldn't have made a difference to the story.

Although, I must admit, at least the ritual of Sin Eating is a pretty nice touch. In fact, quite a bit of the culture behind the book's world has potential for development with a proper story.

Now, the tradition of the royal family line marrying their siblings though... that made me shudder a little bit, even as I see it as another nice touch to the story's world-building. Still...


This review was originally posted at Ani's Book Abyss / BookLikes in March 2015.