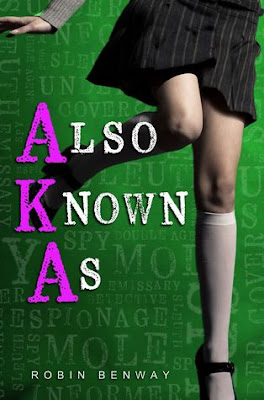 by Robin Benway
Book 1 of Also Known As


I had the hardest time figuring out how I felt about this book.

On the one hand, it was absolutely enjoyable, sweet, cute, and so much fun to read! Teen spies! Yay!

On the other hand, Maggie makes a better high school drama queen than she does a spy--in fact, as much as I’ve come to love her, I honestly feel like she still needs some serious training to even be a good spy. Setting aside the fact that, yes, she’s just a teenager and has a lot of growth to go through, and yes, she DOES save the day in the end, she’s still a horrible spy.

Don’t get me wrong. I enjoyed this book a lot. I loved Maggie and her nerdiness. I loved Jesse and his dorky, non-standard YA boy material self with the dorky tendencies and good boy qualities. And I think that Roux is absolutely fabulous in her insanely strange, no nonsense, straight forward, no-holds-barred way of living her life! In fact, Roux might have been one of the reasons I loved this book so much.

I loved the simple and sweet romance that unfolds between Maggie and Jesse at a much more agreeable pace than most books normally allow--there is no insta-love, there are no unnecessary triangles (or other polygonal points), no random misunderstandings or unneeded angst... There’s just a boy and a girl who both find each other interesting and attractive; they banter, they get to know each other, they go on a date, and they fall in love. Even in spite of the big secret that Maggie is keeping tucked away as a teen spy wherein she is to befriend said boy in order to complete her assignment, the romance still remained innocent and sweet and oh, so adorable.


The Story:
I thought about using the official blurb I found at Goodreads, but it doesn’t really do the book any justice. In fact, it’s also a little misleading.

”Suddenly, she's attending a private school with hundreds of "mean girl" wannabes, trying to avoid the temptation to hack the school's elementary security system, and working to befriend the aggravatingly cute son of a potential national security threat... all while trying not to blow her cover.”

Only one of the three things listed in that part of the blurb is actually accurate in the book’s story. There were no mean girls--Roux started off a bit haughty and let off the vibe for potential mean girl in her introduction… But Roux turned out to be that crazy kickass best friend who makes life so much more interesting by being the world’s most adorable seventeen year old drunk and even more dramatic than the dramatic with her overactive imagination and crazy ideals, as well as managing to be the most endearingly clingy best friend who falls hopelessly into best-friendship with Maggie like lightning.

I absolutely love how Roux obsess over and idolizes Maggie, while at the same time saying to Maggie anything that comes to mind even if it could potentially be hurtful or rude or crass or too true to be acceptable. I love how honest and straight forward she is and I love that Maggie just takes it like a pro and moves on by dealing all the insults and the harsh realities and the strange lovin' right back at Roux.

And there was never mention about hacking the school’s security system. In fact, very little of the book actually bothers with the high school unless it was about Maggie interacting with either Roux or Jesse. And even the potential “fish out of water” antics we’d been expecting to see from Maggie (since she’s never been to a normal school nonetheless been a normal teenage girl) were kind of downplayed.

Instead, Maggie gets along at school just fine (despite failing French class) and we focus more on her mission.

As a genius safecracker, Maggie gets her first solo assignment to infiltrate Jesse Oliver’s home, find his father’s safe, and retrieve vital information that may become potentially dangerous to her and her parents’ spy organization, The Collective. But in order to get close to Jesse Oliver, Maggie needs to go undercover as a high school girl at his school and find ways to befriend him.

I’m not going to deny that a little bit of working those suspension of disbelief muscles was very much required. I don’t know if teen spies truly exist in real life, though there have been lots of movies and lots of books throughout the ages, made for family and kids to enjoy in one of those “no brainer” type of ways. But as far as fictional teen spies go, Maggie definitely proves that she still has a lot of development to go in her profession.

I’m sure that having prodigal safecracking skills doesn’t automatically make you a super spy extraordinaire. And so because she’s young, and still a teenager who is finding her way in life, I give her a bit of leeway for not understanding the fundamentals of being a spy. Sure, she’s good at what she DOES know how to do, but the whole “this is my assignment, so everyone needs to butt out of it” thing got a little frustrating.

I’m not a spy and all, but wouldn’t it be more ideal to have a back-up person to bail you out if plans don’t go in the right direction? Wouldn’t it be a good idea to have a back-up plan in case something unexpected happens? I get that Maggie’s been itching to prove herself to her parents and the spy organization for a long time and is excited to get her solo assignment and thinks she can handle everything by herself; but stupidly allowing herself to be in danger because she doesn’t want to take any precautions or follow fundamental spy rules (such as not taking the elevator and not blowing your cover), makes it hard to take her seriously as a spy.

However, when she’s in her element--safecracking--she starts to feel a little bit more like a spy. So the best thing to do for her, really, is to get her where she needs to be, let her do her thing, and then move on. Maggie may not be ready for the undercover spy stuff… especially since she lets her emotions influence her decisions and it’s only her first solo undercover assignment.

Maybe this is just part of her growth.

Overall, however, I DID love Maggie a lot--despite being over-dramatic about her new high school assignment and her own teenage life (as youngsters are wont to do), she’s also got that strangely dorky, nonsensical and sarcastic humor, and an endearing nerdiness that her new friend Roux swears will get her “socially murdered” that makes it hard not to love her.

And then there’s Maggie and the spy parents--both sides of which are trying to figure out how to infiltrate normal life as a regular family after so much espionage fun in different countries. Because now Maggie has to pretend to be a normal teenager going to high school and her parents have to pretend to be normal parents to a rebellious teenager. It was interesting to see the short-lived “fish out of water” scenes, even if they seemed a little ridiculously extreme. It’s a little incredible that being a spy equates to being unable to follow or keep up with normal people day-to-day trends and activities. I mean, it’s not like they live under a rock or in a cave, right? Is it really possible to be THAT clueless?

Setting aside the sometimes overzealous comedy and dramatic tone of the narration, Also Known As really was super cute and lots of fun to read! Mainly, I loved the character interactions.

I loved that Roux wasn’t the typical YA mean girl and turned out to be so readily lovable and spontaneous and crazy and just NOT your typical YA female friend you typically find in YA contemporaries. I loved that Jesse was so dorky and uncool in so many ways that made him stand out from a lot of other standard, broody YA male characters who are all about being protective and manly and perfect--because Jesse is far from perfect, far from broody, far from manly, and definitely far from Mr. Popular material... aside from his being good looking and rich, I guess.. And I loved how the sweet romance between Maggie and Jesse developed without any angst, complications, or unnecessary triangles or insta-love.

Overall, the characters… that’s what made this book so great.


This review was originally posted at Ani's Book Abyss / BookLikes in June 2015.