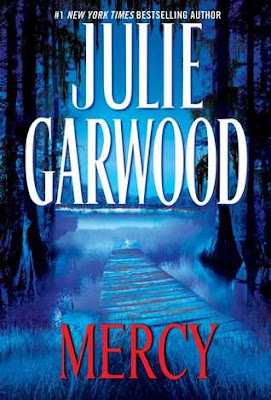 
I can't say that I really enjoyed this book, but I can't say that I didn't either. I'm giving it a really "meh" rating, but only because I was kind of disappointed and maybe a bit over-expectant on my part. I went into Mercy expecting a dark romantic suspense, but I got out of it more of a part crime novel, part contemporary, with some other stuff happening on the side. There was a short stint of a mystery with the "surprise" twist at the end, but I'm not sure I can even really call it that.

I will admit to one thing though: I enjoyed this book because Julie Garwood is a good writer. Her writing style isn't exactly my cuppa, but despite the extra tangential anecdotes with side characters, she doesn't linger long enough on filler material for me to be frustrated. In contrast, some of it is actually kind of amusing, and her humor is decently sarcastic at the right moments. Her characters just tend to talk a lot about the most insignificant matters.


Mercy is the second book in Julie Garwood's Buchanan-Renard Romantic Suspense series. And even though the first book in this series, Heartbreaker was a bit mediocre for a Romantic Suspense, it did well as a murder mystery, which is why I didn't dismiss the entire series altogether and actually became interested enough to continue.

I suspect that the Buchanan-Renard portion of the series officially begins now that we've met Theo Buchanan and Michelle Renard and know of their respective families and homes.


Theo is a Department of Justice attorney giving a speech in New Orleans to the local law enforcement at a formal dinner function. Michelle was attending her own dinner-party function with the medical community in the same hotel. When Theo is struck ill (appendicitis, ya know), Michelle Renard is the one who finds him, gets him to a hospital, and performs emergency surgery on him. And all of this after he throws up on her brand new $400 dress and clips her in the eye while he's confused and struggling.

As all Romantic Suspense novels go, it's pretty much love at first sight for these two... or rather, lust at first sight, though there's no doubting that they're already thinking about forever and babies in spite of the fact that neither are interested in a long term relationship with the other for the typical REASONS.

Weeks later, Theo decides to take his vacation in tiny little Bowen, Louisiana where one Dr. Michelle Renard just happens to live. Well, he's in New Orleans again to finish off that speech he never gave on account of being attacked by his own appendix, and Bowen is just "right there". Also, he was invited to go fishing with Michelle's father, and Theo likes to fish, so it's not a bad idea. Of course, there's that other little reason nagging in the back of his mind that he won't admit, of course, except for the fact that he doesn't stop flirting and coming onto Michelle the moment he arrives in the little town.

No. Of course, he's not in Bowen because he wanted to see Michelle Renard again. He's there to fish and have a relaxing vacation. And that's why he takes on one legal case after another, can't seem to say no to rounding up a bunch of high school kids and teaching them how to play football properly, and chooses to stay at Michelle's house rather than a motel in the next city.

The actions and descriptions in this book are so deliberate they almost hurt at times. I always question why authors feel like they need to take pains in emphasizing certain matters, but then take extra pains in making their character contradict themselves over and over again. And also why it's so necessary for descriptions to tell me exactly what I should be thinking about these characters rather than letting me make my own decisions about them.


Anyway, while this Contemporary Romance unfolds predictably, we have the "crime thriller" side of the book in the form of a secret organization (if you can call it that) called The Sowing Club made up of lead man John Russell and his three friends. Basically, since the moment they could manage it, these four have been cheating, stealing, and embezzling and getting away with it. They've managed to square away a pretty large sum of money in an overseas account, evading taxes and whatnot so that they can all live happily ever after in their old age.

The story on this side begins when John Russell makes the decision to have his friends help him kill his wife. But they call it a "mercy killing" because she is supposedly so sick and so miserable that death would be better for her than continuing on in her state. It doesn't take long for his friends of the Sowing Club to realize that John is an evil, terrible man and a liar because his wife was not dying and he merely wanted to get rid of her so he could claim her trust fund. So they are angry at him... but seriously, murder is murder, so it's not like they could really do or say anything about it.

But the main conflict of the story begins when John learns from his wife's attorney that not only does he only get a hundred dollars out of her will, but she's also got blackmail on him so that he doesn't contest her will. He finds out that she knows about his illegal extracurricular activities and has made copies of all his files and has set up those copies to be sent to someone via her law offices after she dies.

That particular someone happens to be her cousin, Michelle Renard.


There is entirely too much going on in this book, to be totally honest, and a lot of it not directly related to the main conflict. Then again, I'm not sure I know what the main conflict is, because we seem to be telling two stories anyway. We've got the Sowing Club illegal dealings and their ultimate beef with Michelle Renard who somehow, unknowingly has the evidence to put them all in prison--she's just never laid eyes on that evidence nor does she even know it exists. Then we have the Contemporary Romance of Theo Buchanan and Michelle Renard who's love story began way before the whole "crime thriller" debacle and probably would have continued to unfold even without the tie-ins with the Romantic Suspense.

I guess, for a romance, the story wasn't half bad even though the mindsets of our couple and the direction of the love story was formulaic and predictable. It was still enjoyable, nonetheless. In contrast, the crime thriller part was kind of mundane, monotonous, and a little boring to boot. It was also a fairly predictable story line and the book could have done without and have been a cute little romance instead.

The one thing that DID annoy me, though were the townspeople of Bowen who took one look at Theo Buchanan, decided that he was the new high school football coach... and then just clung to him despite his many attempts to clear the misunderstanding. And then Michelle's father, Jake was all too meddlesome, creating opportunities for people with legal problems to "run into" Theo and playing off of his friendly, altruistic personality, got him to play legal aid for all of these people, free of charge... despite the many references to how the people of Bowen "take care of their own" and "don't take any charity."

And then when they learn that Theo is not going to stay on at Bowen (I mean, when he came to town, he DID specify that he was here on vacation... so... okay...), they all take pains to make him want to stay. Of course, they're scheming is very amateurish and not quite effective, but their thoughts were of how they could manipulate Theo Buchanan into remaining in Bowen so he could help the people with his legal expertise as well as coach the football team.

Did anyone decide to ask Theo Buchanan what he wanted to do?

Final Thoughts: I had only intended on writing a short, brief opinion... but my mind got away from me. But Mercy is one of those books you can't seem to put down because you want to know what happens in the end... even though you already know what happens in the end. Somehow I managed to find it enjoyable on a very, very, very superficial level. Fact is, it's not my kind of story, but it wasn't really that bad either.