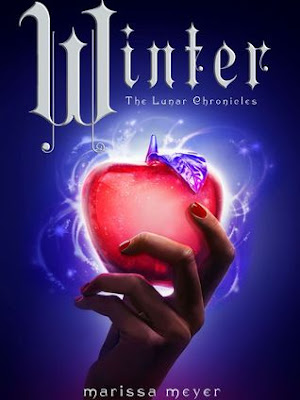 Book 4 (final) of Lunar Chronicles series
**Based on Snow White

See Also:  Winter Reading Updates -- a single post compilation for all the reading updates I made while reading Winter; originally posted separately at BL.


This book is immensely long.

But the FEELS!  The FEELS!


I had heard rumors before the publication that the book would be 800+ pages, but I didn't really believe it.  How much more material could Marissa Meyer possibly come up with to close the series?  Apparently, there was still plenty of material to be had on this last long stretch of the Lunar Chronicles.

However, the length of the book was totally worth it.  While there were moments when I found myself feeling the drag of the book's length as well as some unnecessary tangents, I can assure many people that the entire time I was reading Winter, I was pretty much:

And maybe a little bit.

And despite how long the book felt and despite some moments of frustration, when the end finally came around, I found myself flipping the page one more time and feeling kind of empty and disappointed that it was all over.  I probably would have settled for some epilogue or extra material or some other unnecessary wrap-up just because I wanted more.

Did I mention more Thorne?

The conclusion of both Winter and the Lunar Chronicles series, however, concluded very well and very ideally, tying together all the character lines and story tangents; even bringing back some old running gags and closing up the fairy tales that each book had been based upon.

More than anything in the series, I loved the characters and how they kind of formed a ragtag rebel group who all had absolutely no idea what they were doing, but were all so determined to do what they needed to do to save the world.  I loved all their interactions and all the relationship lines, and I dare say that I loved some of the bonds and friendships formed even more so than the resident romance couplings.

First and foremost, while I've always loved every character in this series (except for Levana, she still scares the crap out of me), I've always felt that Kai was dull and carbon-copy standard as a YA main male character.  But in Winter, it was as if something finally snapped in our beloved Eastern Commonwealth Emperor's mind and he just let himself go.  And I loved that he just didn't care for propriety or image anymore.

It was great, because then I ended up being more happy for the romance between Cinder and Kai.

Then again, Cinder was a ball of frustration that I'm not even quite sure how to explain.  In the first book, she was sympathetic and relatable with lots of potential for greatness.  The following two books after gave her so much growth and so much badassery that I really, really looked forward to seeing her go to action and kick some Levana butt.  But in this last book, it's like Cinder finally reached her story development peak and we're continuously at a standstill.

No matter how much planning she put into every single one of her moves, it always seemed like she never planned for that "worst case scenario", and so each and every single time something started working for her, the evil queen would retaliate and it would knock Cinder and her gang a few paces backward much too easily.  I'm not going to deny that it got frustrating after the third or fourth time this happened.

And then sometimes her strategies just felt kind of feeble.  When we learn what the rebel group's plan was once they got onto Luna, I was actually wondering:  "Wait.  What?  That's your big plan?  That's it?  That's so fragile."  Because there was just so ways that a plan like that could have just collapsed before it even got started.

The above reasons had had me contemplating docking a star for a couple hundred pages of book.

Fortunately, in the end, I decided that I just really loved this book, no matter the flaws and the frustrations.

The characters definitely make up for a lot.

I'm so happy that we get to see more of the story from Cress' and Scarlet's points of view.  I'm still in love with the Wolf pre-Scarlet-abduction and love how he can still turn into an adorable young, innocent boy because of her.  Scarlet, of course, is still her badass self and despite the fact that I've always lamented that she has no room for development because she's already kickass enough for every, I'm glad that we get to see more of her in her badass action mode.

Already stated, I'm a lot happier getting some more story from Cress' POV, if only because she's also quite adorable in her own little way and not quite so naive as she had been in the last book.

Winter and Jacin were an excellent inclusion.  Winter may be insane and delusional as a result of not using her Lunar gift, but in a way, her ramblings sometimes made a lot more sense than a lot of stuff most sane people would say.  Coupled with a good, loving heart, it really IS hard not to fall in love with her.

Jacin was alright as another typical YA broody alpha hero, but when put together with Winter, their relationship really just radiates sweet and cute and adorbs to the max.  They might actually be my favorite of the romances in the series, because it's one that's actually quite simple in spite of the fact that it was a complicated situation.

Finally, Thorne and Iko are definitely my two favorite characters in the entire series--possibly Thorne moreso than Iko.  Thorne and Cinder, as I'd already stated in a previous post, are my ultimate favorite friendship bond in this entire series from the moment they break out of jail together to the ultimate showdown at the end of Winter--always so snarky and ready with the insults and quips, but also caring of each other even if they hate to admit it.

Thorne just oozes charm as the rogue who masks everything in a shroud of humor, and lets off a presence of laid back unconcerned attitude in all situations.  But he wouldn't hesitate to follow his friends into battle and is a lot more heroic and altruistic than he gives himself credit for.  I can't explain it, but I'm totally in love with this guy.  His romance with Cress was super sweet and super scattered, but it was still cute.

Iko is just plain awesome.  That is all.

In conclusion:
I loved this book.  Despite the hiccups here and there, and some sometimes awkward conversation between certain unlikely pairs of friends, and some draggy moments wherein I may have felt the novel was a couple hundred pages too long...  In the end, I don't think I'd change any of it for the world.

It was written very well, and honestly, narrated much more smoothly than the previous book even with all the multiple character POVs.  Winter was much easier to follow than Cress had been--no sudden abrupt chapter cliff hangers, no sudden switches from one group of characters to another without warning.  It was perfect.

Winter is a wonderful conclusion to a wonderful series.  And even though, for the past three books I'd always felt there was something missing, something not quite there to make me fall completely in love with the series even if I love the world and the characters, I think Winter pretty much fixes my opinions of it all.

This is an excellent book and has been a wonderful reading experience.  I definitely look forward to The Princess and the Guard novella coming out in a few months, and I wouldn't object to further story taking place in the same world even if not with our beloved characters.  I also wouldn't say no to an "Adventures with Captain Carswell Thorne and Crew"... or something similar to it... you know.  If Ms. Meyer is ever so inclined.

This review was originally posted at Ani's Book Abyss / BookLikes in November 2015.