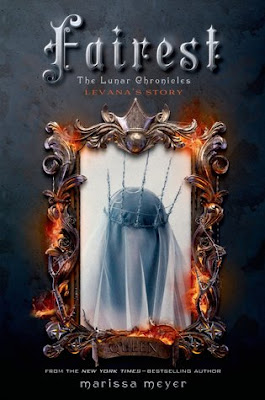 
**This is a "novella" (and I use the term loosely because it's a pretty good length for a novella) that chronicles the life of Queen Levana with snippets into her childhood and insights in her relationships.  It takes place in the timeline pre-Cinder, but it is probably a good idea to read the first three books before reading Fairest if only because this novella also gives hints of other characters from the series.
***There are some things I mention that could spoil some of the details from books written prior to Fairest, so if you have not read Cinder, Scarlet, or Cress, you may not want to read this short review.


Levana has always been a character in the Lunar Chronicles series who both appalls me and frightens me with her scary, evil acts and twisted logic. It's safe to say that this lengthy novella doesn't really make a point to help endear the evil queen to anyone and further cements my reasons for not liking her.

However, at the same time, you also get a good sense of her history with her family, specifically her elder sister Channary (Cinder's biological mother), and many of the other people around her on Luna from mere acquaintances to court thamaturges to the man she falls in love with and the young stepdaughter he brings into her life, Princess Winter. It makes you kind of understand the antagonist of Queen Levana a little bit better--why she is the way she is, even if none of it justifies any of her actions and behaviors, whether they were from her childhood, teenage years, or in the current time line of the series.

Fairest is a really good, well-written novella for the Lunar Chronicles world and certainly puts Levana's life story into perspective. Although after following Levana's rise from spoiled, self-centered, and delusional teenage girl to manipulative, evil queen with a sincerely twisted logical way of thinking, I'm stuck in a place where I'm not quite sure whether to continue loathing her or if I really should be pitying her. Because Levana seems to know that what she's doing isn't a hundred percent morally correct... and yet she does it anyway by justifying all of her actions with her own version of "For the Greater Good of All" reasonings. And yet, at the same time, you can't deny that a lot of her reasonings stem from a selfish "For the Greater Good of Levana", even if she can't seem to see it herself.

This is truly an incredibly written story following the readily detestable antagonist, because rather than full out hating Levana, I became more fascinated with how her twisted logic worked and am looking forward to seeing how her end will come about--if she'll ever see reason or if she'll continue on with her own twisted logic to justify all her evil actions.

Again, Fairest is definitely an incredibly written novella! And despite Levana being one of my least favorite characters in the Lunar Chronicles world, I certainly came to like this story more than the main books in the series (aside from the first book, Cinder, that is). It's simple and straight forward and that is probably the beauty of Fairest.

And the FEELS! They came... and they came with such an unexpected punch that I'm still kind of feeling the jolt. That ending! O.O

This review was originally posted at Ani's Book Abyss / BookLikes in September 2015.