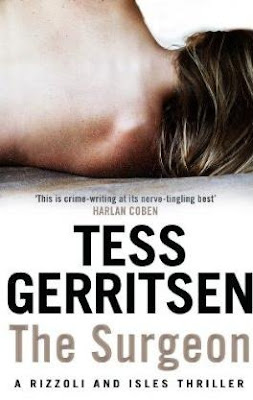 
This is probably one of those books that I would have liked to just read and then move on without really analyzing it. Maybe give it a generic 3 Star rating. If asked, I’d say it was a good read--intriguing, well-written, brainstormed to a ‘T’. It certainly DOES have a great sense of appeal, because even now I’ve put the next book on my hold request list at the library and am anticipating the moment when it becomes available.

But I probably wouldn’t have given thought to writing any kind of drawn out review for it--even now I’m putting thoughts down only because that darn Reading Assignment Challenge requests a short review or a post about my opinions. And when I start typing, I tend to get carried away, even if I half-ass a review.

Was it a memorable book? Maybe. I can certainly recall the gruesome events and the many textbook form info dumps throughout the book--the medical terms, the police jargon, and so on. The characters weren’t the most likable, but they stood out somehow. The atmosphere was gritty, almost too real to be comfortable with considering the subject matter of the book.

There were certainly some things that didn’t sit well with me--for instance, the animosity between the only two women in the entire book for all the wrong reasons. Too many times do I read books or watch movies or television series where there is immense girl-on-girl hate for the petty things such as the way one woman looks or acts. So it chafes a bit whenever I see it in books, especially when it’s used to emphasize one woman’s strength versus another woman’s weakness in each other’s eyes--as if two women cannot be completely different in personality and behavior without hating on each other.

And amidst all of that, there was still a bit of detachment in the way the story was told. Which is why, even though I’m interested in continuing the rest of the series, to see what happens to Jane Rizzoli as the books continue, it’s not like this series is a foremost favorite on my list. At least not yet--there have been various firsts in a series that I don’t immediately warm up to, and so there’s no telling whether or not this will be one.


As far as the story goes:
Several brutal murders occur in Boston, all bearing the same details from killings in Savannah two years prior. Dr. Catherine Cordell is the only survivor of the Savannah slayings, having killed her attacker before he could finish her off. It quickly becomes apparent that the present-day Boston murders are tied to Catherine Cordell and the monster she knows she shot and killed two years ago; a man who preyed on vulnerable women, who raped and then murdered them, cutting them open and taking a souvenir for his sick, twisted pleasures.

So if the man who was responsible for the killings in Savannah is dead, how is it possible for a copycat murderer to know the same gory details of those killings, re-enacting them with the same intimate detail? And why is he so fixated on Catherine Cordell, practically announcing his intentions by leaving her little messages, challenging the Boston PD, stalking her as the ultimate prize in his twisted game?


Some Thoughts:
This book was really more about the murder investigation and introducing the world of the Boston PD within the Rizzoli & Isles series; it was more about establishing a setting and an atmosphere, about establishing the on-paper character relationships and the police politics within the scope of this series, than it was about the characters. While we do see a lot of character interaction and a lot of character insight, I couldn’t help but feel that the small glimpses we get to see about the detectives, Thomas Moore and Jane Rizzoli, about Dr. Catherine Cordell, just all felt like passing thoughts amidst the bigger picture of the crime thriller.

I’m drawn to characters and character interactions. And, as I said, despite there being plenty of it, The Surgeon doesn’t really dwell long on any of the characters--at least not long enough for the reader to build some sort of relatedness or rapport with them. Instead, I merely picked up a passing interest in knowing how life goes for Jane Rizzoli after this book and how she will continue to deal among her career in a male-dominated field.

But that’s pretty much it.

The crime thriller was intriguing enough to draw me in, even if not in that “desperate need to finish reading this book” sort of way. It was well-written and well-thought out. At some times, I wonder if maybe it was too detailed and too in-depth. It’s great that the author does her research and lends legitimacy to her writing, what with the medical terms and textbook definitions and glossary level explanations. But to be totally honest, sometimes you can get a little carried away trying to bring about that sense of realness that it takes away from the story.

I don’t need to know what every medical term means if it doesn’t lend significance to the story. I don’t need every piece of police and medical jargon spelled out for me. Some lesser known terms, maybe; but a lot of the textbook explanations given could have been done without.

Which is why, in the end, despite how well written the book is and despite how much I enjoyed it, my main take-away from The Surgeon hadn’t been how well written the book was, or how readily you get pulled into the crime thriller. It wasn’t the detailed cruelty of the killings, or the sadness of the tragic happenings, or even Jane Rizzoli’s introduction into being accepted as a police detective by her peers (hopefully). My main take away was how much I’d been hammered with vocabulary and a detached definition of all the jargon thrown around. My main take away was how detached everything felt from any feeling--like everything was just being recited from a report of some sort, like a newspaper clipping or some such thing.

Aside from a passing interest, I really DON’T feel much about this book. Again, I will continue reading the series for a while and see where it takes me from there.

This review was originally posted at Ani's Book Abyss / BookLikes in September 2015.