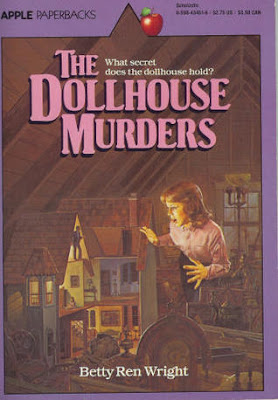 
Side note:  My BFF and I reread this book as part of our intended Mini Book Club buddy reads and so this is a review of the reread of this book rather than the very first impression I ever had of reading this book when I was in middle school... a long time ago.

I remember reading this book when I was still in middle school. It was my first ghostly mystery story and it had every little part of exciting, spine-chilling thrill, as far as I can remember. I was young and I was easily startled and this book had the elements to make me afraid to sleep at night.

Here I am today as an adult, reminiscing and rereading an old childhood favorite, chosen by myself and my BFF as our next Mini Book Club read. It really DOES give off quite the nostalgic feels.

And I'm glad that this book is still as good as I vaguely remember it to be.

I'm not gonna lie -- this isn't the best book in the world and it reminds me of why I used to be such a drama queen when I was younger. Books like these typically highlight pretty well the personality and behaviors of young children when their worlds revolved around very few things. And then the slightest upset or excitement would merit the most dramatic responses.

It also highlighted that sense of loneliness that a lot of us felt growing up with siblings who seemed to garner more attention from Mom and Dad than we would have liked. You always feel like you're being picked on, or that Mom and Dad just don't love you as much as your brother or sister. In my case, it was three brothers I felt had stolen my mother and father's attentions from me. Whenever they would do or say anything that seemed unfair, I took it to an all new level of spoiled brat.

I always told myself that my parents were never fair when it concern me and my brothers -- that whole Double Standards thing... or the fact that Asian families just tend to favor males more than females (which still holds true, but my state of drama-ness is a bit more indifferent now-a-days and less emo).

Looking back, even though The Dollhouse Murders may not have been the best book in the world (it had a lot of tacky prose and dialogue, though it was written in the 80s), it was one of the books during my childhood that had one of the biggest impacts on me. Aside from shaping my slightly Drama Queen-ish personality throughout middle school and high school, it also cemented my love for writing and for mysteries (specifically mysteries with a paranormal flare). I remember finishing this book and always thinking how awesome it would be if I could write my own ghostly mystery -- with a little girl just like me, with a made up family, a made up set of friends, a made up love interest, made up fun, and an awesomely creepy, ghost story.

I might have come up with several different story ideas, written drafts of the first few chapters of several different stories. I've never finished writing a story in my whole life, but the desire to write a ghost mystery for young adults and children has always been there. Eventually that desire to write a specific ghost story gave way to wanting to write altogether. Millions of story ideas and unfinished drafts later, I've still never succeeded.

My calling is really just to read brilliant works by other brilliant minds, I think.

The Dollhouse Murders, upon this second reading is still enjoyable and addictive. Even though you know what's going on, you still like the progression. Even though the ghostly occurrences don't seem as eerie as they did when I was twelve, there's still a feeling of dark shadows and quiet whispers lingering in the back of my mind.

I stopped reading nearing the end of the book to go out into the dark kitchen to find some snacks only to subconsciously shiver at the darkness and the shadows. It was kind of exhilarting, really. And amusing.  And I sometimes startle easy ever since the days of my brother standing in the dark of that space between the bathroom door and the hallway, saying the words "Do you need to pee?" in a low hum of a voice and scaring the crap out of me as I headed down the hall with my mind on other things.

This book has always been enjoyable and Betty Ren Wright (despite my most recent run in with a less than agreeable book) has admittedly excellent writing style and skill. The way she weaved the ghostly happenings around some of the other of Amy Treloar's pre-teen problems was done quite well. Although after reading both books in succession (Crandall's Castle as well as this book), I'm starting to wonder about the adults in Ms. Wright's written worlds. Are they purposely written with subtle hints of being just as stubborn and irrational as children are seen to be? Because even the adults will say or do things that make me wonder...

Then again, I guess those things could still be fairly legitimate as realistic behavior in adults, parents especially.

Just as a coworker of mine has told me before: Parents don't mean to be unfair. They love all their children in different way, is all. And if it turns out that one child happens to need a little more attention than another, said parents will act accordingly. In contrast, if one child seems to have it all together and seems strong enough to take care of him or herself, then that's one less issue that needs to be dealt with.

Something like that, I think, is what she meant.


Who'd have thought that a simple ghostly myster, reread a little over a decade later would bring so much insight to my life (not that I didn't already figure a lot of that stuff out, but whatevs).