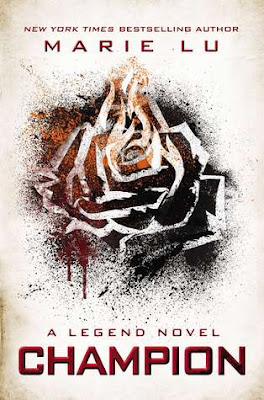 
-- SPOILER ALERT --
**Because this is the third and last book in this trilogy, there may be information in this review that may ruin the reading experience of the first two books if you have not yet read them.

**The BIG SPOILER is hidden.  Please DO NOT click on it unless you've read the book already, or you just like spoilers for some strange, twisted reason.  This isn't a challenge of some sort.  You have been warned.**

On the one hand, I want to really love Champion so that I can really love the entire Legend trilogy equally. It is definitely a fascinatingly creative dystopian (for trendy dystopian standards), and well-written (save for some unnecessarily clichèd tropes dropped into the crux of the story that reminded me too much of how K-dramas use some of the same tropes to elicit those FEELS from the fans). The Antarctican culture was definitely an interesting set-up wherein the people are pretty much living in a virtual reality MMORPG or something like that as a means to determine rank and jobs and whatnot in their society (I feel a potential new book idea coming about using a society of this fashion, though I’m not certain dystopians will be trendy for much longer, so someone needs to jump on that one ASAP!) And the story progress was pretty intense when it needed to be.

On the other hand, even though the book had its exciting moments and even though I certainly DID get pulled into it, there were also a lot of monotonous draggy tangents and scenes, the conclusion felt a little open-ended and rushed, and a lot of end-hour details didn’t really make much sense (and in fact, I felt like the story was in a hurry to wrap itself up because there was only so much time left).

And then those tropes...

It wasn’t like they were really THAT bad, what with

Day’s deadly brain condition that is pretty much untreatable unless he wants to end up dead--which forced him to push June away as decreed by the familiar Trope: Noble Idiocy™ usually found in standard Asian drama storylines; but then he ends up almost dying anyway, because he’s a compassionate hero who doesn’t think his actions through and tries to get himself killed on too many occasions (also part of the Trope: Noble Idiocy™) and one of those occasions finally grants his wish, and so the docs decide to operate on him anyway at the eleventh hour (what more damage could be done to him, after all, since he's been shot twice) and he turns out just fine, physically and he’s going to live, after all, after months of being ill and then being in a coma; but now he’s forgotten everything he went through with June (though, conveniently still remembers his family and Tess, a la an Amnesia Twist™) thus catapulting the typical BIG SEPARATION™ which can only be salvaged by a Heart-Wrenching The-End-Reunion™ after a somewhat necessary but also somewhat choppy Time Skip™

at the very end of the book -- again, seriously DO NOT click on my spoiler unless you really want me to ruin the entire book for you. Just saying.

I just felt like all that angst was unnecessary (even though some of the FEELS created by all that angst DID get to me at one point).  And I hate to say this, but when the conclusion rolled around, I pretty much saw all of that stuff coming and wasn't the least bit surprised by them. Still... it's a lot of action to happen during the end-hour of the story.


Champion had it’s moments, really, and I had my hopes when the book jumps right into the heart of the story without any pretense of set-up. The conflicts (yes, plural) got rolling immediately and away we went. And there certainly were many lines of story to connect and finish while at the same time introducing even more potential plot to be used if we ever decide to re-visit the world of Legend in the future.

And then there’s Metias, who’s ever present presence still manages to wrench a ton of FEELS right out of the black pit of my heart--once again, is it strange that my favorite character in this entire series is one who didn’t even last past the third chapter of the first book? (Maybe Metias is the “Legend”, because he was always the one June looked to for strength when she most needed it.)

And then there are more FEELS that were wrenched from me due to other FEEL-worthy moments in the book. Oh, there were so many FEELS!

June and Day have sacrificed so much for the people of the Republic—and each other—and now their country is on the brink of a new existence. June is back in the good graces of the Republic, working within the government’s elite circles as Princeps-Elect, while Day has been assigned a high-level military position.

But neither could have predicted the circumstances that will reunite them: just when a peace treaty is imminent, a plague outbreak causes panic in the Colonies, and war threatens the Republic’s border cities. This new strain of plague is deadlier than ever, and June is the only one who knows the key to her country’s defense. But saving the lives of thousands will mean asking the one she loves to give up everything.


Overall Thoughts:
The blurb pretty much sums up exactly what happens to get the ball rolling in Champion and the story doesn’t stray far from the advertised plot. Aside from some details (Day’s high-level military position? June is the only one who knows the key to her country’s defense? I must have missed something.) the book wastes no time introducing the plague and an imminent war, and then introducing the conflict created by this new knowledge of the plague--that Eden’s bloodwork might have the answer to a plague cure, and Day needs to turn his brother over to the Republic if he wants to save his country.

Of course, we know how well that request goes over since Day’s trust in the Republic’s governing class is flimsy at best.

Champion was a big ball of rolling intensity as it ploughed onward towards the not-quite-so-well-rounded ending. There were moments of monotony that gave me pause, and then the story would pick right back up and continue on in its same, excitingly intense fashion.

There were more political conflicts than I would have liked. Then there was more plotting, more war, more fighting, more battles... a very typical final book in a dystopian trilogy, where we pretty much just back our heroes into a corner until everything explodes and ends the conflict, whether for better or for worse, but usually in favor of our heroes.

It's unfortunately not all too unique from other dystopian conclusions. It's just written better than a lot of others I've read.

The one thing that still bothers me about the entire trilogy is how very little I’d been able to relate with either June or Day. They are the heroes of this story and we follow their narration, back and forth, throughout three full-length novels. But I have to admit that when it comes to characters, it just didn’t feel like they stood out much despite their unique-ness and their non-standard developments.

I just could not see them as more than the two narrators piloting our journey through a typical dystopian story line. And at the risk of repeating myself, Metias is my favorite character in this book if only because he’s the only one who managed to wrench the FEELs out of me because of him, as Metias. The other FEELs that surfaced throughout Champion had more to do with the situations that June and Day were thrown into rather than for them, as June and Day, alone.

I know it doesn’t make any sense, but that’s the forefront thought in my mind about the Legend trilogy.

Nonetheless, the series. the books, the story… all excellently exciting and decently enjoyable. And I’m honestly just ecstatic that it isn’t “just like every other dystopian out there”. Because Marie Lu really DOES have quite the creative imagination and great attention-to-detail and it DOES make a difference in making Legend her unique dystopian out of hundreds.


This review was originally posted at Ani's Book Abyss / BookLikes in May 2015.