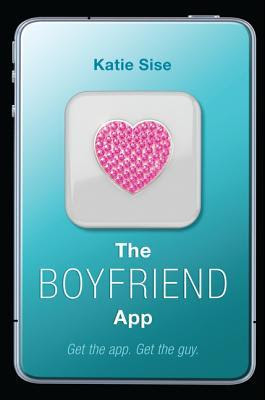 by Katie Sise
Book 1 of App

**There might be some spoiler bombs here and there... but I'm not certain which ones are.  I got a little carried away writing this post.  Just read at your own risk.  And I apologize for not being more clear where the spoilers are.


The Boyfriend App had a completely interesting premise that promised all sorts of potential for Contemporary Romantic goodness in a YA. Before reading it, I foresaw all the possibilities you could think of for growth and development for our main female character, Audrey McCarthy as a non-standard geeky high school girl who has techie skills like none other, who’s going through a hard time in her life, and who is also kind of caught up in finding a boyfriend. After all, most girls in YA are pretty carbon copy across the board with their girly and their pretty and their flirty and their “speshul” statuses despite being a plain and ordinary girl.

Instead, Audrey has a penchant for computers and tech and has been learning the basics since she was a child from her father who is also a computer geek. She’s smart and she knows it. She even hacks into other computers effortlessly and creates apps with so much ease you’d think she was simply doing basic arithmetic.

I think it’s pretty cool and it made Audrey a unique character all on her own.

The Boyfriend App is one of those cute and breezy types of YA Contemporaries that you enjoy mainly because it’s refreshing and cute and adorable. And I will admit that despite the craziness that was the latter half of this book, I DID thoroughly enjoy The Boyfriend App and was mildly entertained.


The Story:
Ever since her father’s death, Audrey McCarthy has not only fallen out of friendship with former best friend Blake Dawkins, but managed to get on Blake’s daily hit list due to a misunderstanding. Because Blake’s father is a bonafide asshole, he took advantage of Blake’s and Audrey’s slowly crumbling friendship to blame Audrey for the fact that he knew Blake was being sexually active. For this, Blake believes her father and decided to take the Mean Girl persona to an all new cruel level. As Blake is the most popular, most powerful girl in school, it doesn’t take long for Audrey to fall into the category of those students constantly being bullied.

Because of this, Audrey can’t wait to finish high school, go away to college, and hope for a brand new start. But college requires money, which is something Audrey and her mother do not have ever since her father died and his name was slandered (by the ever constant evil ass, Blake’s father, because he’s rich and he can… of course). Audrey’s chance comes when there is a competition to design the best app with a $200,000 scholarship reward.

And what does Audrey choose to design? The Boyfriend App that will help all people find a significant other within a 500 mile radius. And then hijinks ensue with the designing and testing of the app… followed by even more hijinks as the story progresses.


Overall Thoughts:
I’ve gotta say that while The Boyfriend App wouldn’t have been the most unique or innovative creation in today’s society, Audrey’s got a good idea going on. After all, one of the largest consumer bases in America happens to be young teenage girls, so what better way to win “The Most Popular App” category than with an app design that would absolutely appeal to young, hormone driven teenage girls? It’s a smart idea. And it helps to catapult a YA Contemporary Romance to create interesting dynamics among the high school population.

The Boyfriend App is an interestingly insightful story on some levels, bringing to light the continually growing market of smart technology, easy to access media files, and innovative and popular apps to go with all of it. On other levels, the book actually ended up getting a little silly with a big conspiracy of some tech company taking place in the second half of the book; which is kind of disappointing considering how strong of a start The Boyfriend App had begun with.

So it’s a bit disappointing that we don’t really get that in the end, and instead, we get some sort of strange, out of context tech conspiracy with even more bizarre happenings after Audrey uncovers this conspiracy. Her Boyfriend App 2.0 required a lot of suspension of disbelief to follow along with (as did the tech conspiracy and subsequent conclusion of said conspiracy).

In a word, things got crazy and I don’t know how to feel about it. Because while things got crazy, things also kind of got humorous while trying to propel Audrey’s little bit of personal growth along the way.

The subtle romance between Audrey and Aiden was low key and cute and actually quite adorable because the two of them are adorable. It’s nice that our main couple are just two nerdy tech geeks who are too shy for their own good, and are trying so hard to preserve their friendship that they don’t know how to take their relationship beyond that. And that’s what I loved about Aiden--that he isn’t the typical broody YA, popular boy with Daddy Issues™ or the like. He’s just a normal kid going through high school, trying to make it into college and start his life; he’s shy and introverted and a nice guy.

The other guy, Xander (who really pales in comparison as a potential love interest) got that part of the stereotype covered and I’m kind of glad that he wasn’t the main love interest (or anywhere part of love interest territory).

As for Blake… I don’t know what to say about her. To be honest, she has potential for a lot of story, a lot of growth and development, and has the backstory and family life to work with. The second book in this series is about her, and there were a lot of underlying “Blake’s cruddy family life drama” being hinted at that I’m sure will be addressed in that second book. But to be honest, I’m not sure if I’d be able to bring myself to read about Blake. I just don’t like her and I’m not even sure an explanation of her insecurities, her crappy family life, her unhealthy relationship with her parents, or anything will make up for the fact that she just isn’t a good person.

Blake Dawkins really does bring the whole High School Mean and Popular Girl to a whole new level of cruel and unacceptable. And I know that some kids can be mean little assholes because they’re young and they don’t consider consequences until it’s too late. That’s why we have literature detailing these issues to help the world understand how devastatingly dramatic, yet miserable high school can be if you get an unlucky draw. That’s why we get second chances in life and that’s why kids are encouraged to make mistakes so that they can learn from them.  (Keyword: learn from them.)

I just can’t bring myself to let Blake’s horrible actions be justified by her lousy upbringing. And I can’t let myself allow those justifications with Blake’s own superficial reasonings. Which, I know, contradicts my entire “Kids will be kids” declaration from above, but at some point you have to draw a line and make them accountable for their own misdeeds.

Her father tells her that Audrey ratted out her sexually active behavior and so now Blake’s on an extreme vendetta to make Audrey’s life miserable by hurting her and her mother. Honestly, I think that Blake’s behavior was too over-the-top for one little betrayal she believed Audrey had done to her. So your father found out that you’re sexually active and you got in trouble. Get over it and move the eff on!

Now, even if it had been true, and even if Audrey had been the one to get her into trouble with her father, there was absolutely no reason to drag Audrey’s family members into the whole little spoiled princess war. Blake had no right to make light of or use Audrey’s father’s death to hurt her; Blake and her stupid friends had no right to carry out the bullying to Audrey’s mother (they practically assaulted the poor woman in the cafeteria), who is nothing but sweet and nice. Those actions were uncalled for. I’m not saying that Blake should be bullying Audrey at all, but her ire shouldn’t have included assaulting an adult who had done nothing to her, and knowing full well that, because of her status, said adult can’t do anything about it.

There are even instances of Blake’s bullying just being delinquent behavior--stealing some poor girl’s wheelchair and riding it down the hall? I’m not even sure how to respond to that one.

But I think the final straw was how, even at the end, Blake continued to grasp for reasons to explain away her mean behavior. That she was forced to act like a bitch because her hand was forced. That she continued to make Audrey’s life miserable because Audrey got too cocky about creating a popular app. That she had always tried to make Audrey’s life miserable because she envied Audrey’s loving family life. That she kept using Audrey’s father’s death to hurt her because Audrey had betrayed a friendship secret to Blake’s father.

Are these really good enough reasons to continually hurt someone and their family?  Is she really going to use these reasons to explain away her terrible behavior?

Because it just feels like she’s still unrepentant and doesn’t believe that she’s ever done anything wrong. A sad and terrible homelife does not justify treating other people like dirt and it sure as hell doesn’t get you a “Get Out of Jail Free” card for committing murder. If that ever happens. Just saying.

Anyway, climbing back down off of my “Blake Dawkins could have had more potential for story” soapbox that had come spontaneously bursting out…

The Boyfriend App is actually quite cute and entertaining once you turn your brain off. I enjoyed it. And that’s what matters.


This review was originally posted at Ani's Book Abyss / BookLikes in May 2015.