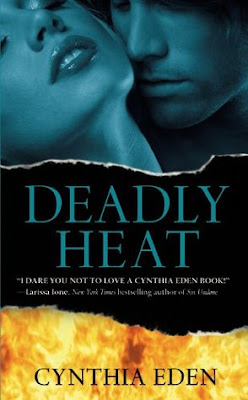 
Deadly Heat was quite an intense read.


The Story:
Lora Spade puts in a plea for help from the FBI's Serial Services Division (SSD) to look into recent fires she believes is being set by a serial arsonist. The link between each fire are the victims that the arsonist traps to be burned to death in their own homes or in abandoned buildings.

In comes Kenton Lake who's first meeting with Lora involves a fire and being punched upside the head. An informant who was meeting Kenton is trapped in a burning building, and the FBI agent's first instinct is to go find him and pull him out. Instead, Lora is the one who clocks Kenton when he gets difficult, and then drags him to safety, away from the burning building.

Meanwhile, it seems that the arsonist/killer has set his sights on Lora as part of his sick and twisted fire games.


Some Brief Thoughts:
Deadly Heat was definitely more romance than it was crime thriller.

Despite the fact that the focus was more skewed towards the romance, the suspense of crime thriller didn't disappoint. But there's just something about the way both books (Deadly Fear and Deadly Heat) were presented that falls short somewhere and I'm not quite sure I can put my finger on it.

There were times when it seemed inappropriate for the romance to be front and center in certain scenes; however, the story would then refocus on the serial arson investigation and level itself out. To be honest, I've found that Cynthia Eden does excellent work with romance and erotica (even if some of the details got a little bit... too much). And the suspense part of the genre balances out quite well, too.

I suspect this is just standard for a Romantic Suspense with a side of Erotica that is much heavier in the Romance than it is the Suspense.


Final Thoughts:
That being said, Cynthia Eden is quickly becoming one of the few romantic suspense authors who automatically pique my interest. Deadly Heat (as well as Deadly Fear) is a very enjoyable book that hooks you right in from the beginning.

It also doesn't hurt that we've got a great set of characters to hold the story up. Lora being a kickass firefighter who saves the day multiple times throughout the book is a plus.

It was also nice to see Monica (from Deadly Fear) as a prominent agent in the investigation. Luke's and Samantha's (also introduced in Deadly Fear) belated appearances were also welcome. There's also potential at hand for Lora's gaggle of brothers to have their own stories expanded upon--that would be interesting to follow.

On a side note, there were a few instances of typos that stood out, but not enough to detract me from enjoying the book completely.


This review was originally posted at Ani's Book Abyss / BookLikes in March 2015.