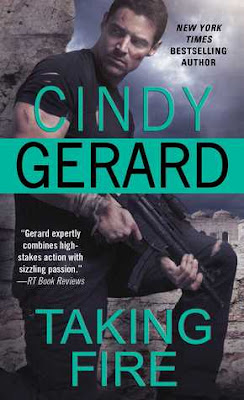 
Taking Fire is definitely a step up from the previous book in the One-Eyed Jacks series. And with an ending that gave a nice, sweet emotional punch, I'm all for loving it. While Bobby and Talia aren't Mike Brown and Eva Salinas, I can't deny that I loved them and their relationship just the same. If anything, I really appreciated the delicate care that went into developing this Second Chance Romance, especially after all the things that both parties had to go through before they could put burdens and past anger behind them.


The Story:
Six years ago, Bobby Taggart was a warrior for hire, mining intel from a terrorist leader, while nursing his still fresh hurt and betrayal from the screwed-up resolution of Operation Slam Dunk. This is where he met Talia Levine, a somewhat mysterious woman claiming to be a war correspondent who gets close to him and makes him fall in love. But then the terrorist leader he'd been working on is assassinated and Talia disappears; and there's no doubt in his mind what her motive had been in the first place when he finds the tracker hidden in his phone.

Having completed the hardest mission of her life, Talia had made the decision to leave her organization and her people six years ago. Falling in love with Bobby Taggart and spending such unexpectedly wonderful days with him hadn't figured into her training. She'd needed to make a choice: her heart or her mission. And unfortunately for Bobby, she had chosen her people before walking away from them.

Six years into the present, Bobby is sent to Oman as a representative of ITAP, the security firm cover for the covert ops teams he's become a part of. And thanks to a bomb attack he and Talia are literally thrown back together. Then he finds out that Talia has a target painted onto her back thanks to that fated mission six years ago, and out of the goodness of natural instinct chooses to help her. And then he finds out another secret she'd kept from him for six years...


My Thoughts:
It's actually quite interesting how well Cindy is able to disguise her romances beneath the exciting, action-packed progression of a military thriller. Because after some careful thought (especially while trying to bumble through my awkward summary above), I realized that Taking Fire is really more romance than it is suspense. I mean, sure, there's a lot of fighting involved: lots of guns, lots of explosions, definitely lots of suspense with the main conflict pitting Talia and Bobby into danger each and every chapter.

But all of that is just a nice coating of distraction bouncing off the second chance love story between Talia and Bobby. I mean, even the official blurb on the book page starts its summary off about how Bobby Taggart meets the woman of his dreams.

Anyway, not that any of those points above are really that big of a deal. The point is, this is a two part book that is pretty well divided as a romantic suspense and a contemporary romance. And I kind of liked the way it was set up. Taking Fire hit a lot of all the right emotional buttons while still giving us a great suspense to page through hungrily.

Because while the action was exciting and attention-keeping, the romance and revelations were quite thought-provoking and lovely. Again, I loved how well Cindy handled the reunion between Bobby and Talia as they find each other again through chaos, and then figure out how to love again when everything settles.

Meanwhile, it's not like either Bobby or Talia really standout in any unique way, but as a team (once Talia learned to start trusting Bobby's decisions) the two of them worked out quite well together.

Like previous Cindy Gerard books, Taking Fire boasts well-crafted characters who are readily loved. Despite some of Talia's questionable decisions, I found her to be a strong, wonderful female lead in this book; and it was great being able to see into her decision from six years ago, the hard choice she had to make and the consequences and the guilt she'd had to live with from then on. She was a covert operative from her own country's secret government agency; she became a woman in love. She had to choose one or the other.

I'm not a big fan of this kind of hard decision, but in this particular scenario, I thought it was handled quite well.

A Random Tangent:
While I was reading Taking Fire, it brought to mind Cindy's fifth Bodyguards book, wherein a similar plot device is used. However, in my opinion, I very much prefer this current book to the one in the past--probably because the story at present is a bit more thoughtful and heart-wrenching. Maybe also because of the fact that Bobby Taggart is a much better person, with a much more legitimate reason to live in anger after his life collided with Talia's. Maybe also because Bobby was already in the mindset of helping Talia even through his hatred of her, even before he finds out what her big secret is.

Also the setup for the other book didn't really make much sense to me anyway, even if the subsequent action was a nice page-turning, fast-paced story.


Final Thoughts:
Taking Fire really isn't all that special in terms of story. In fact, despite the long ramblings in this review, I really DID have a hard time trying to figure out what to say about this book that I didn't already say in the opening paragraph that I wrote two weeks ago upon finishing my read. I'm even wondering now if I should have just taken that one little paragraph alone and kept it simple.

Anyway, Taking Fire is entertaining, enjoyable. Again, it hits some pretty interesting emotional buttons. And you know, I loved the characters and I loved the story. And maybe that's all that really matters.