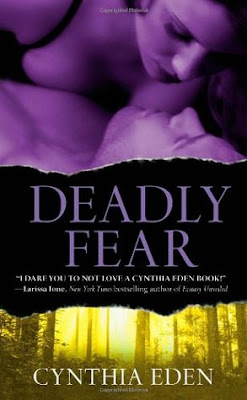 
I'm hesitant about giving this book an actual 4 Stars, but I really DID enjoy it, so I want to give it a 4-star rating. So we'll just settle on 3.5 and I won't feel so bad.

Because despite the fact that I felt like there was a disconnect with the characters in the first part of the book, and also despite the fact that I felt like there was too much focus on the romance and the lust and the sex (I mean, come on! You guys are in the middle of investigating a serial murder and time is of the essence here! There will be time to think about each other's naughty parts later!), the actual murder mystery and investigation was written rather well. There was a decent enough balance between the romance and the suspense that I couldn't really complain.

I mean, this is Romantic Suspense after all, with an erotica tag on it, so I expect romance and I expect suspense and I expect sex scenes.  But the beginning might have emphasized too fully on the lusting and the sex when I was wanting to see more about the murder investigation details.  But about halfway through the book, the genres seem to even out and I was content enough about that.


The Story in Brief:
Anyway, a serial murderer uses his victim's fear against her to kill her in his own twisted games. (I say "her" only because he mostly targets women, but he doesn't seem picky, really.) There's a mysterious, secretive past lying at the heart of this killing spree that involves Monica Davenport and her own fears. It's a standard type of murder mystery, but the execution of Deadly Fear was done very well and had me hooked once the action got rolling.


Overall:
The story was good, the characters (once you got to know them halfway through the book) were good, the writing is good, and the concept is good. Despite the romance getting too much focus, it really wasn't too frustrating, though not my favorite love story in the world. And I may have to continue this series when I can.