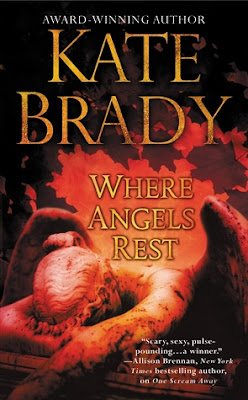 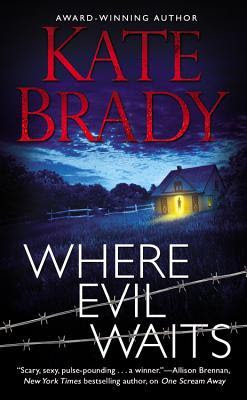 
At the end of the paperback for Where Evil Waits, there is an excerpt for a book called Where Danger Hides--the book is supposedly about Alayna Mann who makes an appearance in Where Angels Rest as an attorney, one of the Mann siblings we are introduced to in this series.  But try as I might, I can't seem to be able to find this particular book, which tells me that either it is still a work in progress, it never got finished, or it never got published, for whatever reason.

I'm only a slight bit disappointed, but since Where Evil Waits and Where Angels Rest were published two years apart, and because Where Evil Waits was published in 2014, I suppose there's still a chance that this third book will make its appearance soon.

Now that my tangent is finished, I at least have something to post for this review.  Because, to be totally honest, I haven't been sure what to say about this Mann Family series--well, mainly the first book, because the second book was a bit more exciting and I DO have a little bit to say (see below)  It's a good, well-written romantic suspense duo, that's for certain, and I DID enjoy both books.  Much like the other two Kate Brady books I've read, they were immensely enjoyable and had enough excitement and suspense to keep me hooked. 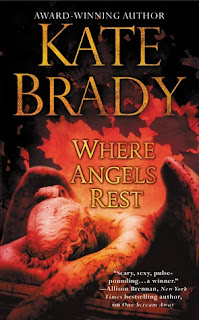 A RACE FOR SALVATION

For the past decade, psychologist Erin Sims has been helping victims of violent crimes... but the one person she can't save is the one who matters most. In only seven days, her brother will be executed for a murder he didn't commit. Convinced she knows the real killer, Erin is determined to bring him to justice.

A COUNTDOWN TO DESTRUCTION

Sheriff Nick Mann moved to rural Ohio to forget the tragedies of his past. When Erin shows up in town, bringing scandal and unwanted media attention with her, Nick knows she's trouble. No one believes sleepy Hopewell could harbor a serial killer... until residents begin to disappear. Now, as Nick untangles the town's dark secrets, he can't help falling for the beautiful woman with the warm heart and iron will. As the days tick by, the truth becomes clear: Erin is hunting a vicious murderer--one whose only escape is to silence her forever.


Where Angels Rest is highly enjoyable and has a great premise to start off.  It's as much a murder mystery as it is a crime thriller, but I can't say much else about it.  While the beginning starts off strong, and the characters are great, I can't help but notice that the narration and the story progress becomes a little awkward as the book moves toward the end.

I'll give it one thing though: the overall experience is quite intense.

Still, I will file it under an "I liked it" rating and move on.

The romance might not have been the best.  But I DID readily come to like both Nick Mann and Erin Sims, even if Erin seemed to be a little on edge, and Nick had his own problems with denial and wanting his rose-colored world to remain rose-colored.

I wish we could have gotten to know some of the other characters a little bit more.  And I wish the romance could have been a bit better developed--it seemed a little awkward and forced.

The crime mystery aspect had its moments, but by a certain point you kind of figure out who the killer is.  The big kudos though is how well the red herrings are spread out, because finding out all the other secrets being kept by persons involved was actually a good twist.

Again, not really much stands out about this book, but I found it likable and hard to put down, so that's a plus.  Un-put-down-able is always a plus. 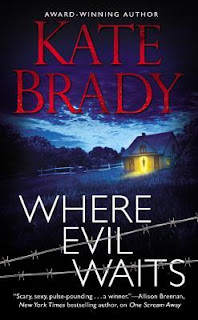 Special prosecutor Kara Chandler is very good at her job--so good that a homicidal mastermind vows to kill her and everyone she cares about. Despaerate to save herself and her son, Kara seeks out cartel hit man Luke Varón. The last time she dealt with Luke, she saw him beat the system and escape prison. But now, the most dangerous man she's ever met is the only one who can keep her alive.

HE'LL STOP AT NOTHING

Luke Varón isn't who he appears to be. After spending years in the criminal underworld, he seeks redemption... and revenge. Yet when he sees the fear in Kara's eyes, he can't walk away. People around her are being murdered, and only he can help uncover the killer's motive. Now as danger closes in, Kara and Luke must trust each other with their darkest secrets--before the evil in their lives destroys them both.


First of all... the blurb given from the back of the book is a little misleading. This is something we find out pretty early on in the story.

Secondly, it probably doesn't take a rocket scientist to see how obvious who Luke Varón really is. If you have no idea, I won't spoil it for you, but it's pretty damn obvious.


I liked the second book in this series a bit more than the first.

Where Evil Waits is really less of a murder mystery than the typical crime thriller, but what makes it a mystery isn't the "whodunnit" part of the crime, but the "Why did he do it?" part.  I've always been a bit meh about books wherein the killer is already acknowledge in the beginning of the book; at the same time, I'm also not very thrilled about following along inside the head of our killer either.

But Where Evil Waits really DOES handle this aspect pretty well, because we are still given a mystery--or rather a curiosity--to discover.

At first, all the flashbacks to detail our killer's moment of truce seemed a bit unnecessary.  But at the same time, I think think they served their purpose.  I'm just not certain they made me very comfortable, although grudges and murder with such intimate passion never are comfortable subjects.

The above stated about the way in which the crime and murders are detailed and handled was one of the reasons in which I liked this second book more than the first.  Another reason is the romance--it was a bit better developed with a nicely incorporated "getting to know you" phase despite the chaos and the danger and the tension.  Of course, it doesn't stop the instalust--which I don't mind; but I found that the instalust only took one measly little turning point to become instalove--which I DO kind of mind.

But I can live with it.

Kate and Luke are readily likable main characters.  Kate has spunk that you expect from an assistant district attorney.  Luke is the usual broody, commitment-phobic, charming alpha male who's commitment issues suddenly disappear when the right woman shows up.  But unlike his brother from the first book, I feel like he had less of a reason to be shy of commitments, so I'll give him that sudden change of heart and move on.

The rest of the side characters in this book were great touches, and again, I'd love to know more about them.  The crime thriller/serial killing aspect was a bit strange, but at the same time it held its creepiness factor.

Let's just say that I had a hard time putting this book down and just kept right on reading until the very ending.  Even when I finally couldn't make it and fell asleep for a few minutes due to exhaustion of my very long day, I still trudged on.

One day--it took only one day to finish this book.  There's no doubt that I did very much enjoy it.  A lot.

One of the things that I like about a Kate Brady book (all four that I have read so far) is how quickly we fall into the suspense of the crime thriller.  Even if the murderer is already know, even if there is no mystery to speak of, the books are packed full of nervous tension of the suspense and you find yourself sucked into the book.

It's that easy to get hooked.

As books in the romantic suspense genre, these two are highly enjoyable and a good representations.  For a rainy day or not, they certain DO make for a great reading spell.