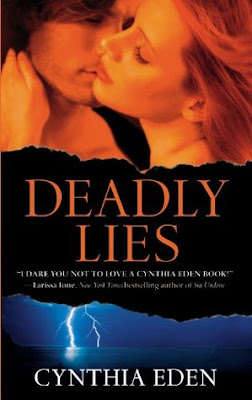 
Just as suspenseful, thrilling, and romantically heated as Cynthia Eden's first two Deadly books, Deadly Lies was very much intense and un-put-down-able. I believe that I had picked it up thinking to just read a few chapters to get started... then I ended up a lot further than expected.

Once again, another Cynthia Eden book that hooks you from the start, with likable characters and an intriguing criminal mystery. The dark tone of the story helps too. And once again, the focus is really more on the Romance and the steamy sex than was really necessary. However, I flew through this book so quickly that I didn't even really take note when or if the romance scenes felt inappropriately placed--at least not until I finished the book and thought about it.


The Story in Brief:
Samantha Kennedy was introduced in the first Deadly book, Deadly Fear and suffered a tragic, deathly torture at the hands of the killer called "Watchman". Using her fear of water against her, the twisted killer would drown her and then resuscitate her just to turn around and drown her again--it was an endless cycle of hell for Sam until she was finally rescued by her fellow SSD agents.

Unfortunately, Sam has not been able to recover from this incident. She's worried that she never will and that her SSD boss will see through her anxiety and that everyone will think that she is incapable of continuing to do her job. In order to forget, Sam chooses to lose herself in no-strings passion. Which is how she meets Max Ridgeway.

At present, the SSD is investigating a string of serial kidnappings--young college boys from well-to-do families are being taken. And the stakes are starting to become higher when two of the most recent kidnapping victims get sent back to their families in pieces.

The next kidnapping victim turns out to be Max's younger step-brother, Quinlan Malone. And on top of that, the SSD have learned that the game is changing for these kidnappers--their patterns are changing and their crimes are escalating.


Overall Thoughts:
As per usual, there are Romance elements spread throughout the story at some of the most inopportune spots. Sam will be in the middle of investigating a lead, but then she'd run into Max and the two get sucked into their whirlwind passion of lust and sex. And then the reader is left wondering, "Wait, what about that lead you were in the middle of following? What about the kidnapping case? What about the victims and the murders?"

And then almost immediately--after a quick scene of fast, steamy sex--we get right back on track: another victim gets kidnapped, calls are made, and Samantha slips into the Malone household, undetected even though the kidnappers specifically specify that there are to be NO COPS INVOLVED or else Quinlan will die.


I think why I liked this last Deadly book more than the previous two had to do with two things:

It probably also helped that we've known Sam since the beginning and have watched her struggle through her terror with the promise of finally being able to let go and move on with her life now.


Final Thoughts:
Deadly Lies is fast-paced and exciting, and as I had already mentioned, you just didn't have time to dwell on the disconnects between Romance elements and Suspense elements, because both aspects are written very well, even if their continuity is a little bit stunted. As in the first two books, it was hard for me to reconcile the case investigations suddenly taking a turn into steamy sex being had and then back again.

But, honestly, did that really bother me at all? No. Not really.

Again, if it's one thing that Cynthia Eden does quite well it's Romantic Suspense. And despite the fact that this is the last book in the Deadly series (as of present, because who knows what will happen in the future) I really WOULD love to continue following the FBI team of Serial Services Division agents. There are still so many more stories to tell (Kim Daniels and Jon Ramirez are stellar side characters who need their own books) so will happily welcome a continuation of this series if it ever happens.


This review was originally posted at Ani's Book Abyss / BookLikes in April 2015.