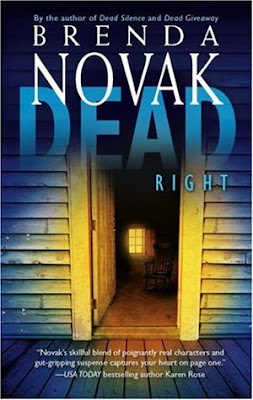 **As this is the third and last book in an ongoing story line with an ongoing conflict, there will be mentions of things from the first and second books that may ruin the reading of those books. Please proceed with caution, or better yet, don't read this review if you haven't yet read the first two books. This is a Spoiler Alert for the first two books in this trilogy.**


Twenty years ago Madeline Barker's father disappeared. Despite what everyone else thinks, Madeline's convinced her stepfamily had nothing to do with it. But the recent discovery of his car finally proves he didn't just drive away. Worse, the police find something in the trunk that says there's more to this case than murder.

With no other recourse, Madeline decides to hire a private investigator—even if the cops don't like it. Even if her family doesn't like it. But when P.I. Hunter Solozano begins to uncover some shocking evidence, someone in Stillwater is determined to put a stop to Madeline's search for the truth.

And that means putting a stop to her. Permanently.


In this conclusion to the Stillwater trilogy, the truth comes out into the open and Madeline has to face it head on, whether she likes it or not. Dead Right brings the story line and suspense up a notch when Madeline decides to outsource a private investigator to help her solve the mystery behind her father’s disappearance.

To be totally honest, a case like this SHOULD be left in the hands of an outsider, if only because too many people are too biased about the rest of the people in this small town. You would never get a fair investigation or a fair trial--things would turn out to be like ye olden days of “Burn that witch! She’s the one that did it!” just because someone looked at you wrong.

While, we, as the readers know the entire situation--it has been explained twice before in the first two books of the trilogy--Madeline, as well as the rest of the small town of Stillwater has still been kept in the dark. The gossips and rumors and accusations are still being flung around, but due to the fact that there is no body nor any substantial evidence, no arrests have ever been made and the public can only continue to gossip and speculate.

The book starts out with the discovery of Reverend Lee Barker’s missing Cadillac found in the quarry. And along with the vehicle, new evidence comes to light that finally has Madeline questioning everything she’s ever believed in about her entire life after her father had gone missing.

Bringing in Hunter Solozano, a private detective from California, it seems that a good investigator outside of the entire Stillwater drama stage is able to determine something that others with secrets or biases would never be able to do: find the truth and bring it to attention.

If it’s one thing that Brenda Novak seems to do well (and this is from simply reading this particular trilogy alone), it’s suspense. As I have mentioned in previous reviews of the first two Stillwater books, I continuously had an urgent sense of “How does this all conclude?” and “I need to know what happens!” going on. And no matter what was going on in my head, I just couldn’t seem to put the book down for anything. So once again, I have managed to finish a book within one fairly long reading session with few pauses to attend to nature.

I might have already known the truth behind the circumstances, and the author takes no pains to hide any information; but just the mere suspense of watching Madeline uncover each truth, and watching the rest of the Montgomery’s hold their breaths in constant nervous anticipation for the truth to be brought into the open was enough anxiousness to my nerves to make me want to keep reading.

I continue to be conflicted about Madeline, as a character. I never really cared much for her in the first two books, and while the third book brings a lot more of her feelings and her anxieties into the forefront, I still found it hard to relate with her. I feel like I should be more understanding about her losses and more sympathetic to everything she’s gone through (her mother’s suicide, her father’s disappearance, being stuck in the middle between a town of lynch mob and her beloved, singled-out step-family). But I just couldn’t seem to give a rat’s care about her problems.

And I wonder if it isn’t because I already know the entire backstory behind what happened.

I know it can’t be easy to live your life losing all the people you love and not knowing the reasons why. Which is why I don’t begrudge Madeline her constant need to ask questions and to find out the truth.

But I also can’t seem to put myself in her shoes; and instead I keep seeing the situation from an outsider’s point of view who is more biased towards the Montgomery family (even though they did break several laws). The Montgomery’s have spent their lives being looked down on and never truly accepted on top of the tragedy that occurred so many years ago. When Reverend Barker disappears, the whole town of Stillwater descends upon the family with two very different reactions towards the stepfamily and towards Madeline.

Madeline, however, has been coddled her entire life by the town who has already accepted her with no questions. She is “Poor Madeline who lost her mother and father at a young age and is being duped by the nasty, vile Montgomery’s who don’t deserve the life they were given in Stillwater.” The entire town has always been sympathetic towards her; and judging from a particular scene from the first book, Dead Silence, are ready to forgive her for any and all mistakes she has made. When she and Grace both break into Jed’s auto shop office and Madeline gets caught, she’s simply given a slap on the hand and told not to do it again. If Grace hadn’t gotten away or had been discovered as well, the town would have lynched her.

In the second book, Dead Giveaway, if the town didn’t hold Madeline at a double standard from others just because she’s the reverend’s daughter, she wouldn’t have gotten away so easily with hiring someone to threaten another and almost costing Clay his life. No one held her accountable for any wrong doings she committed, even if she felt guilty about it herself.

And so despite seeing more into the mind of Madeline Barker, I still found it relatively conflicting to determine how much I care about her. There were a lot of moments when she recounts childhood memories and where she does her monologuing that gave me the impression that, either she’s subconsciously selfish and egocentric and doesn’t realize it, or she just doesn’t look at the big picture very well.

For instance, flashbacks clearly show how her mother was going through a terrible depression; Madeline remembers a childhood where she would listen to her father speak disappointedly about how her mother wasn’t good enough because she was being weak. And Madeline would agree with him; even now as an adult, thinking back on the situation, she still agrees with him that her mother was weak and undeserving. It pained me to wonder why Madeline never questioned the fact that, rather than berating her mother for being depressed and weak, maybe someone should have been trying to help her mother get through her depression. It struck me as highly selfish and saddening that, despite how much it showed that her mother really loved her, Madeline continuously took her father’s side and refused to see that he could have been wrong.

Other things struck me as Madeline being highly selfish. Despite knowing that continued attention on the case of her father’s disappearance would continue to bring trouble and stress to her step-family (of whom she claimed to love fiercely), she still manages to put them on the spot, over and over again. And any blind person can see that her siblings are forever putting her needs ahead of theirs, even while trying to hide that big, ugly secret that could ruin their relationship.

And so it was hard for me to sympathize with Madeline a good 50% of the time.

I liked him almost immediately. The moment he arrives in Stillwater and starts challenging Madeline, I liked him. He’s an outsider and therefore doesn’t know the recent history of Stillwater and its people. He’s got an unbiased and more open-minded opinion about investigation. He doesn’t immediately revere people on pedestals, nor does he immediately sentence a likely suspect. And he’s got a clear vision of what’s really going on around the small town.

I’d like to think that because of Hunter, the storyline following Madeline as the main female protagonist was easier to follow because Hunter doesn’t coddle Madeline (at least not at first).

He tells her the truths as he sees them, picks up on facts about the people of Stillwater that Stillwater’s own people cannot see past their biases, and pushes Madeline to understand and accept the truth.

In a way, he was good for Madeline. She needed to step outside of her rose-colored world. She continuously pushed to find the truth all these years, but when the truth turned out uglier and less ideal than she had hoped, she immediately started throwing a tantrum about it like a child. So she needed someone in her life who could tell her to harden up her emotions and take the world like a grown-up.


The overall storyline for the entire Stillwater trilogy wasn’t entirely fascinating nor the most story-worthy. But the execution of the entire series was written fabulously. Even though I still had conflicting feelings about Madeline, it didn’t deter me from enjoying the book. Even though I already knew what the outcome was for the story, it didn’t make the journey any less exciting. Even though the characters weren’t completely unique or outstanding, they were good people and they stood out in their own ways.

Overall, I really DID enjoy the entire series, even if it really wasn’t much to write home about. Sometimes there are books that you just happen to enjoy despite all its faults and this particular trilogy just happened to work for me.


This review was originally posted at Ani's Book Abyss / BookLikes in October 2014.